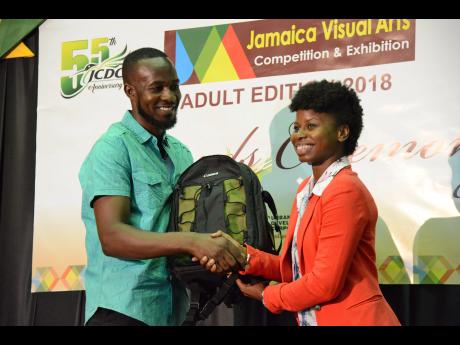 Rudolph Brown
Conard Stone receives the first place jury prize for the most outstanding entry from Simone Harris of The Tourism Enhancement Fund. 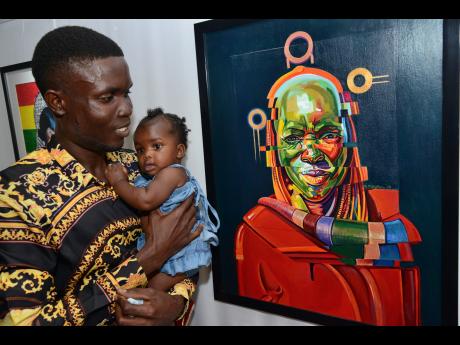 Rudolph Brown
Jermaine Morgan with his daughter Nicholatoy seems captivated by this piece. 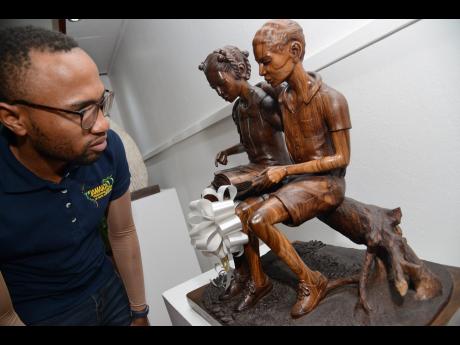 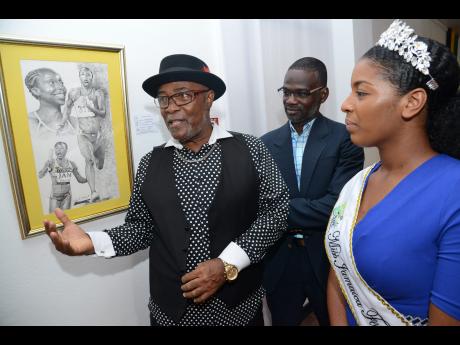 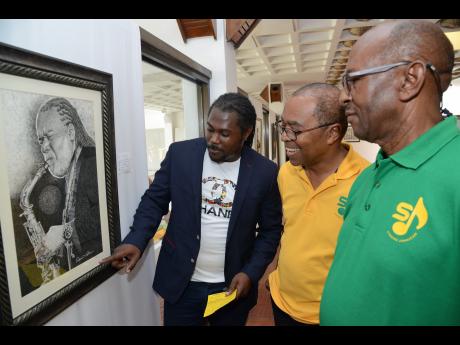 Using the wood of our national flower (Lignum Vitae) to express his creativity, has won Clarendonian Conrad Stone, first place in the 2018 Jamaica Visual Arts Competition.

With entries received in seven categories: painting, photography, drawing, collage, printmaking, textiles and fibre arts and sculpture/assemblage, Stone wowed the judges with his fantastically detailed wooden sculptures. Completing the top three slots were Renae Johnson from Kingston and St Andrew in third place for her photography (a hobby she picked up two years ago) and Textile artist Ester Chin from St Mary. All winners walked away with trophies, a DSLR camera, a shared booth at next year's Liguanea Art Festival and a cash award.

The Jamaica Visual Arts Competition has become a signature programme in the Jamaica Cultural Development Commission (JCDC) for the past 55 years. It began as two separate elements - the National Fine Arts and the National Photography competitions, but both were merged in 2005.

Going forward, the adults will be separated from the juniors who will compete in their group biennially, with the first batch of entrants being accepted in 2019. "The Ministry of Culture, Gender, Entertainment and Sport remains committed to creating avenues to foster creative and cultural expressions of all Jamaicans," said Denzill Thorpe, permanent secretary with the Ministry of Gender, Culture, Entertainment and Sport, who spoke for Minister Olivia 'Babsy' Grange at the exhibition's official opening and awards ceremony at the Jamaica Conference Centre on Sunday.

"The Jamaica Visual Arts competition is a signature programme of the JCDC, and is one such avenue that continues to act as a launching pad for the careers of a number of Jamaican artists," he continued.

The exhibition, which will remain until August 31, include the works of master pen-and-ink artist Patrick Kitson, and is titled 'Patrick Kitson, The Definitive Collection 2018'.

"He's a multifaceted creative individual, who is also a skilled musician and songwriter," is how Thorpe described him.

Kitson has been professionally practising art for over 30 years, beginning as a graphic designer in the mid-80s. He wrote and arranged Strong Jamaica for the Escarpment Road New Testament Church of God Choir - who placed in the top 10 of this year's JCDC Festival Song Competition.

He invited the choir which performed as part of the evening's entertainment package. He also invited festival song ex-competitor Koriq, who heartily performed his entry, Let's Do It In Jamaica.