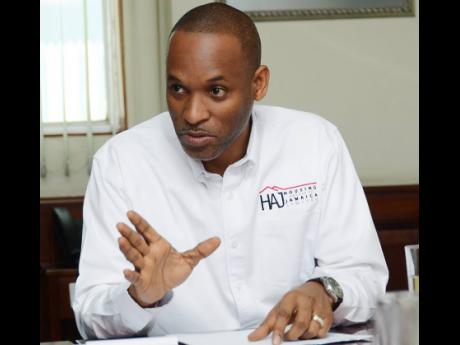 Hundreds of Jamaicans have already expressed an interest in buying into the recently announced Catherine Estates, some eager to pay their deposits even though construction has yet to begin on the development set to be the largest such venture undertaken in St Catherine since the construction of Greater Portmore in 1992.

The development was announced last week, following the inking of a partnership between the Housing Agency of Jamaica (HAJ) and China Harbour Engineering Company Limited (CHEC) to build 1,650 studio and one-bedroom homes in St Catherine at a cost of approximately $9.5 billion.

HAJ Managing Director Gary Howell estimates that, since last week’s announcement, at least 300 persons have made contact to see how they can secure one of the units.

“It is a high demand project. Very, very high demand, because even government entities have been saying that a number of their staff are interested, so we have been getting a lot of response,” he told The Sunday Gleaner.

The reaction does not come as a surprise for Howell, who was the manager for sales in 2013, when the HAJ had conceptualised the project as the Bernard Lodge Housing Development with the aim of providing low-income housing units for 1,584 prospective homeowners. That project was shelved, however, after the initial investors pulled out of the deal, disappointing the more than 700 depositors who had bought into the vision.

“I took it personally because, being the one to head sales and then not being able to deliver to them, I felt a bit disheartened for a lot of the persons because they were looking to realise their dreams of becoming first-time homeowners,” he said.

Still, 47 of the depositors who had paid down on the units, which were advertised at $4.2 million for studios and $5 million for one-bedrooms, exercised extreme faith and refused to take back their money, despite the shifting of the timeline. They will be paying the original price instead of the projected selling prices for the units of $5.5 million for a studio and $6.6 million for a one-bedroom dwelling.

“They are holding on, because they know that, on the market, they won’t be able to find anything else,” said Howell.

“We did a lot more due diligence this time, that’s why it took so long to come out. We made sure of what we are doing now. These persons will definitely be getting their houses this time,” he assured.

The development of Catherine Estates is scheduled to commence in November, on lands in the controversial Bernard Lodge area, off the Spanish Town bypass. Prime Minister Andrew Holness, CHEC Americas Division president, Dr Zhimin Hu, and HAJ Board Chairman Norman Brown signed the project agreement during a ceremony at Jamaica House on October 15. Holness said the 1,650 units being built will form part of the 3,027 affordable solutions that the HAJ is slated to deliver by the end of the 2019-20 fiscal year.

Howell said collection of deposits won’t begin until early next year, but a full schedule will be developed that will help guide prospective buyers.

... Opposition: We welcome the move

Dr Morais Guy, who was the minister with responsibility for housing in 2013 when the Bernard Lodge Housing Development project was initially announced, is pleased that an investor has now been identified so movement can begin on what is now being called Catherine Estates.

“I was a bit disappointed that it did not go through, particularly from the perspective that many potential homeowners had bought into the project,” Guy told The Sunday Gleaner.

“They had paid down their funds to the Housing Agency of Jamaica (HAJ) and were quite rightly expecting that they would have benefited from the units that were being sold,” added Guy, who was recently appointed opposition spokesperson for health and wellness, and leader of opposition business in the House of Representatives.

“The challenge we had then was to try and find another investor who would come with the capital, because then the Housing Agency of Jamaica, all we had to offer as part of the joint venture project was the land,” he said.

There were several hiccups, including the fact that changes had to be made to the plans outlining the configuration of the storm-water drainage for the development.

“I am happy that somebody has come on board and has taken up the project, because at the end of the day, Jamaicans are going to be the ones that will benefit from the housing and, whether you are Chinese, Japanese, American or Jamaican, the reality is that they are developing the housing sector. So from the perspective of the Opposition, we welcome that move as well,” said Guy.

“It is bigger than Greater Portmore. It is just a start we are giving; we are giving a start and then they can expand over time. Jamaicans are very creative, they just want a start,” HAJ Managing Director Gary Howell said in defence of the small unit sizes.

He said the development has attracted the attention of many civil servants such as nurses, firefighters and police officers, because an individual can purchase a unit as a single applicant through the National Housing Trust (NHT).

“What you find a lot of times is that, because most of the housing solutions on the market require a bit more than that, a person would have to get a NHT mortgage, plus another mortgage from another institution. It poses a challenge sometimes for them to find the total mortgage outlay. When you can get a unit that your NHT mortgage alone would cover, a lot more persons would now be able to benefit. So, you see, a lot more persons would be going after it,” he said.

Catherine Estates will be developed in six phases, comprising 14 clusters with a wide range of amenities and features. This includes potable water supply and connection to the National Water Commission’s centralised sewerage system, storm water drains, road networks, sidewalks, and streetlights. Additionally, there will be two large parks for community recreation; and land earmarked to build a primary school and high school, as well as a church, police station, health centre and commercial facilities.

Prime Minister Andrew Holness has noted that Catherine Estates will “ultimately be a place of choice for Jamaicans to live, work, play, raise their families, do business and retire in their own castle”.