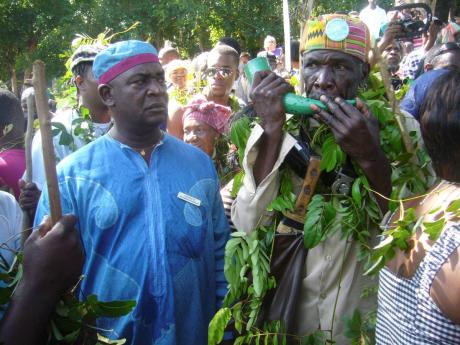 For the first time in 283 years, the Accompong Maroons in St Elizabeth will not be staging their customary face-to-face annual celebrations on January 6, because of the ongoing COVID-19 pandemic.

The event, which features several components, including civic and recreational activities, is known to attract local Maroons and non-Maroons alongside regional and international visitors.

“Regrettably, because of the COVID-19 situation, we are forced to break from tradition this year,” said Colonel Ferron Williams, the leader of the Accompong Maroons. “However, those events that we are not able to do face to face will be done virtually so that the experience can be shared with those we cannot accommodate face to face.”

According to Williams, there will be traditional honouring of the ancestors, which is one of the primary reasons for the annual celebrations.

“All ancestral celebrations will be observed in appreciation of our freedom fighters,” said Williams. “The activities that we are doing on location at Accompong will be streamed live on the Internet so those who can’t come physically can watch the event here in Jamaica or wherever they are in the world.”

The day’s activities begin with the ritual proceedings at 10 a.m. and will be followed by the civic ceremony, which will culminate at 5 p.m.

COVID PROTOCOLS TO BE OBSERVED

According to Williams, in addition to not having any crowds, all the health and safety protocols as it relates to the COVID-19 pandemic will be observed.

“We will be observing social distancing, the wearing of masks, and proper sanitisation,” said Williams. “We know that there are people who will be disappointed that we have to be doing it this way this year, but hopefully, when this COVID-19 situation is behind us, we will be able to go back to our normal celebrations.”

The celebration is primarily to recognise the birthday of Cudjoe, the famed leader of the Maroons in 1738, who led them in successful battles against the British, who ruled Jamaica then. Cudjoe is highly revered among Maroons for his bravery and the sacrifices he made to ensure his followers did not fall under British rule.

Traditionally, the celebrations include singing, dancing, storytelling, cooking and, in recent times, sound system music, which has become a major drawing card for especially the non-Maroons.

“The celebration is an important part of our tradition so we had to find a way to make it happen,” said Williams. “The civic ceremony is particularly important so we are happy that we will be able to do that face to face and within the health protocols.”