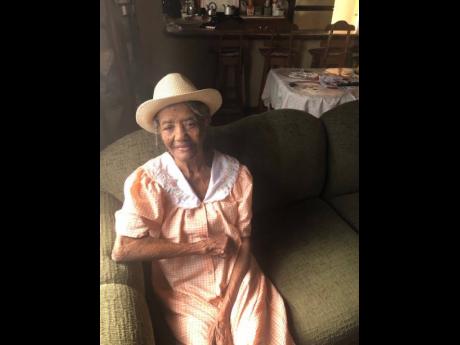 It is not often that elderly persons get to the golden years enjoying good health. So, for the family of Vera Brown, who celebrated her 100th birthday on January 21, it is more than a miracle that she is still able to clown around and playfully throw punches as she romps with her adoring caregivers – two of her children.

In speaking to her longevity, Brown did not cite any special athletic attributes in her youth except two cherished virtues, “be kind and charitable,” she revealed as the factors behind the illustrious journey that has seen her celebrating her hundredth birthday.

Like Violet ‘Aunt V’ Moss-Brown, who had the enviable distinction of being the world’s oldest person prior to her death in 2017, at the age of 117 years, Brown was also born in Trelawny, on the outskirts of the parish capital Falmouth, and interestingly, she is affectionately known as ‘Miss V’.

However, unlike Moss-Brown, who remained in Trelawny at her Duanvale home all her life, Miss V left Trelawny to take up residence in Catadupa, where she settled with the man who was later to become her husband, Anthony Brown.

The union between Miss V, who was partially schooled in Trelawny, and her late husband produced 10 children, three of whom she has outlived so far.

The centenarian, who was born on January 27, 1921, is still able to move around freely by herself, and except for the occasional complaints about minor arthritic pains, she gets by daily with a minimum of fuss.

In describing how she feels about reaching the enviable landmark of celebrating 100 years, Brown remarked: “No longer fit to pick up, throw weh nor dash weh,” she giggled, without offering any further explanation.

When it comes to food, Miss V declared herself a lover of soup with a fair share of ground provisions; albeit she is not a fan of flour and rice.

With her health in good shape, Miss V is looking forward to enjoying many more years of the ‘good’ life, especially the chance of having a real after-100 celebration, which was not possible this year because of the ongoing COVID-19 pandemic.

Her caregivers, especially her daughter Winsome, is determined to continue to provide the type of home environment that will allow Miss V to continue to live in comfort, as she continues to add years to her days.