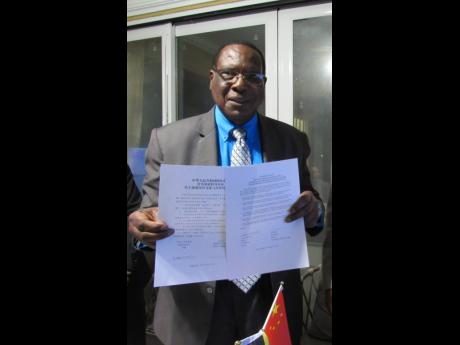 Contributed
Mayor of Montego Bay, Leeroy Williams, proudly displays a signed copy of the MoU that established sister-city relations between Montego Bay and Zhuhai in China.

Jamaica’s premier tourism destination Montego Bay further solidified its ties with China when it signed a memorandum of understanding (MOU) to establish a sister city arrangement with Zhuhai last Friday.

The pact was signed by Montego Bay Mayor Leeroy Williams and Li Chong, the vice-mayor of Zhuhai, during a joint virtual ceremony. Montego Bay had previously established sister relationships with the cities of Hangzhou and Yiwu.

Following the signing of the MOU, Williams expressed pleasure with the latest development, noting that the bond between Montego Bay and Zhuhai further opened the door for deeper diplomatic relations between Jamaica and China.

“Today’s signing of this MOU is just the first step towards future developments and partnerships on real tangible programmes and projects to benefit everyone,” he said.

The mayor forecast that the possibilities for growth would be favourable in the post-COVID-19 era.

National Security Minister Dr Horace Chang, who participated in the virtual event, said the signing of the MOU was another statement of the long-standing friendship between the people of China and the people of Jamaica.

“The friendship between Jamaica and China is strong and long-lasting,” said Chang. “Jamaica shares a number of firsts with China, and in very short order, workers from that Asian country will be engaged in the construction of the Montego Bay perimeter roadway.”