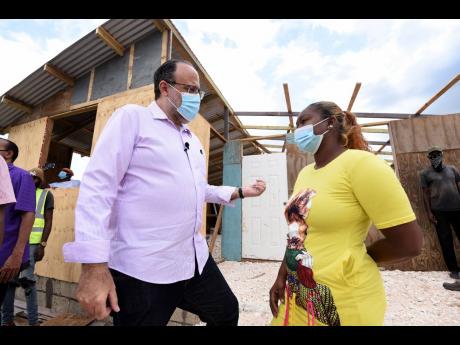 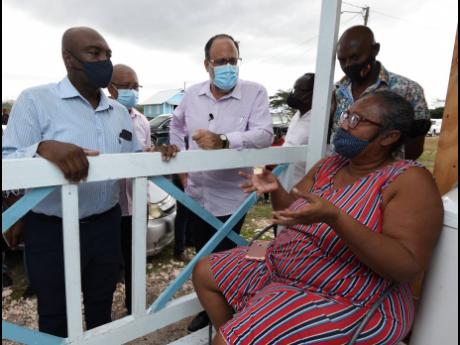 Opposition leader Mark Golding has condemned the treatment meted out to former sugar workers who were forcefully removed from Innswood Estates lands recently.

Golding, along with a team of senior party officials, including General Secretary Dayton Campbell, Spokesperson on Local Government and Community Development Denise Daley and Spanish Town Mayor Norman Scott, visited the site where some of the former workers were relocated to get a first-hand view of conditions.

After observing their living conditions, Golding criticised the Sugar Company of Jamaica (SCJ) Holdings Limited for what he described as its callousness and lack of respect for the rights of the former sugar workers who, as well as generations before them, worked tirelessly on plantations.

“I am saddened by what I am seeing here; people who have been living on these lands for generations suddenly have their lives disrupted. It is an indictment on Jamaica that we would be treating people like this,” Golding stated.

“And although they didn’t own the real estate, they have been living here a long time and have accumulated a lot of assets, and to have cleared them off the property without proper arrangements being made for their relocation is a disrespect to them and the people of Jamaica,” the opposition leader continued.

Golding cited the lack of proper planning when the lands were being sold to developers, and the lack of protection for the people who were going to be affected. He pointed the finger squarely at the SCJ.

“Now, where is the planning? There must be arrangement to protect the people who have been living on the property for years and years and years. These are not squatters; they are sugar workers and it is the Sugar Company of Jamaica that had done this,” he said.

“We are very disappointed that in this time of COVID, people should be put in this additional stress all because of money arrangement between the bigger players.”

But SCJ Holdings has refuted claims that it was being inconsiderate when it demolished 15 family homes at Innswood Estates.

In a press statement on February 15, SCJ Managing Director Joseph Shoucair said the state-owned company had exercised due process, and that the demolition was a last resort after the families failed to vacate the land so it could be handed to the new owners as agreed.

The SCJ said that it first notified the residents of its plans for the development of the land in 2014 and after a number of meetings, an agreement was reached for SCJ to help the families relocate to Ebony Park.

“Following the consensus on the location, in the presence of their attorney-at-law, the residents were asked to execute a deed of release and discharge in May 2020, and did so willingly,” Shoucair said in the release, adding that the company constructed 10 homes at Ebony Park at great expense, with the assistance of Food For The Poor Jamaica.

“ ... [The homes were] equipped with electricity from the Jamaica Public Service Company and water from National Water Commission. As an interim measure, due to the low pressure in the NWC line, the company has also provided each resident with a tank for the storage of water,” Shoucair added.

Golding said on Tuesday that families still living at Innswood Estates were in heightened anxiety over their uncertain future.

He indicated that the Opposition would continue to advocate for the displaced residents.