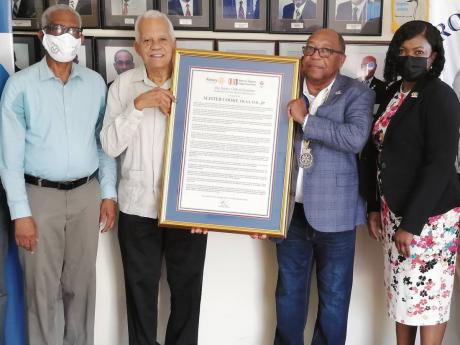 Alister Cooke, OD, JP, former general manager of the Shipping Association of Jamaica (SAJ) and Kingston Wharves Limited (KWL), was awarded with a citation from the Rotary Club of Kingston “for vocational service and a lifetime of helping others to escape poverty and gain self-respect”. The presentation was made at a virtual ceremony on Thursday, January 28.

The citation saluted Cooke as “a business and professional leader, who has relentlessly encouraged competence, honour, integrity, trustworthiness and good citizenship” and was presented by Alva Wood, president of the Rotary Club of Kingston. The recipient is the eldest of three children to parents Alan Alister and Lynette Ann (nee Girvan), and was born in 1942 in the parish of St Andrew, Jamaica. After graduating from Jamaica College, he was articled for two years as an audit clerk at the auditing firm Carman & Bruce (now PWC).

It was while auditing the accounts of the SAJ in 1962 that Cooke was offered the job of chief clerk. He accepted the offer, while simultaneously completed part-time courses for the Chartered Institute of Secretaries and Administrators at the College of Arts, Science and Technology (now the University of Technology, Jamaica), of which he is a Fellow.

This would be the beginning of a star-studded career in shipping that has already made the history books ( History of the Shipping Association of Jamaica 1939-2005).

A major turning point in Cooke’s career took place with the 1967 labour agreement that saw port workers being paid weekly by the SAJ if they reported for work in line with their contract. This contract was the foundation for a stable and productive labour force which is now globally competitive in this age of containerisation.

The new arrangements for a centralised weekly payroll came at a time when computers were being introduced for such purposes, and Cook aced an aptitude test for persons interested in being trained for the new computerised system. This marked the start of his exciting and continuing relationship with digitalisation.

Cooke was soon appointed both data centre manager and office manager and introduced more efficient systems, which extended beyond payroll, to encompass the accounting functions and the deployment of labour. He was promoted to general manager in 1978, In 1981, he was employed to GraceKennedy, then later seconded to Port Computer Services Ltd, a subsidiary of the SAJ established to provide computer-based services to the private-sector companies operating at the port.

In 1994, he was appointed project manager with responsibility to merge the corporate structures of Western Terminals with KWL. Here he applied advanced project management software to create a smooth and successful implementation of this major undertaking. In 1995, he accepted the post of general manager of KWL when the operations of Western Terminals were being merged with those of KWL. This merger made KWL what it is today, and Cooke introduced numerous cost-saving and time-saving processes that reduced the plethora of documents required to move cargo and to dramatically improve customer services.

Accountability was a key concept for Cooke in his style of management, and he ensured that systems were in place to so that everyone, including himself, maintained accountability within their areas of responsibility – and were rewarded for their successes. That KWL is today one of the top performers among the companies on the Jamaica Stock Exchange, proof of the KWL team’s great success.

It is therefore no surprise that KWL has won the Caribbean Shipping Association Award for Best Multipurpose Port, and that managers from other ports in the Caribbean and beyond regularly visit KWL to observe and learn as they develop their own systems and procedures.

The exemplary Joint Industrial Council, which promotes harmonious labour relations at the port of Kingston, is another proud Jamaican achievement to which Cooke is pleased to have made his own contribution along with other giants of the shipping industry.

Despite his heavy workload, Cooke found time to perform public service as chairman of both the HEART Trust/NTA and the National Council on Technical and Vocational Education and Training. He is also a justice of the peace and was awarded the national honour of Order of Distinction (Officer Class) for manpower development.

He also joined the Third Battalion of the Jamaica Regiment (National Reserve), rising to the rank of major and earned his ‘sharpshooter’ status from his many shooting awards. Cooke was also conferred the JDF Medal for efficient service. This is, indeed, a man of many talents.

After being presented with the award citation, Cooke expressed his “heartfelt appreciation for this unexpected award”. He told the few present in person, and the many who participated online, that the occasion gave cause to reflect on how trans-shipment and logistics have become the principal earnings driver for investors and workers, creating profits and hundreds of highly skilled jobs in multiple disciplines.

Cooke asserted that “Kingston becoming the ninth-largest port in Latin America is one of the greatest achievements of our country” and that it happened “because of the shared vision of our 1960s port management, labour leaders, workforce, and titans of Jamaican industry”. He said that this vision was supported by massive Port Authority of Jamaica investment in the container terminal, additional private-sector investments in human resource development, equipment, and IT systems for operations.

Cooke congratulated the Rotary Club of Kingston for their proud record of making a positive impact on thousands of Jamaicans and living up to the Rotary motto and creed ‘Service above self’. He said he was “greatly confident that the club will build on its successes as they partner to make Jamaica a highly productive and peaceful middle-income society”.