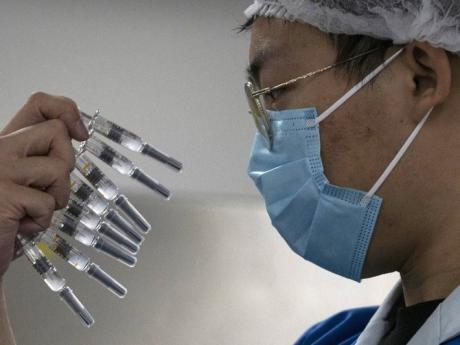 In this September 24, 2020, file photo, a worker inspects syringes of a vaccine for COVID-19 produced by Sinovac at its factory in Beijing. China approved two new more COVID-19 vaccines for wider use Thursday, adding to its growing arsenal of shots: one from CanSino Biologics, and a second one from state-owned Sinopharm. (AP Photo/Ng Han Guan, File)

The National Medical Products Administration gave conditional approval to a vaccine from CanSino Biologics and a second one from state-owned Sinopharm.

Both are already being used among select groups of people under an emergency use authorisation.

China now has four vaccines to immunise its population.

CanSino said its one-shot vaccine candidate is 65.28% effective 28 days after the dose is given.

It can be stored at 2 degrees to 8 degrees Celsius, “making it more accessible especially to the regions with underserved public health,” it said in a statement.

It relies on a harmless common cold virus, called an adenovirus, to deliver the spike gene of the coronavirus into the body.

The body then makes the spike proteins, which generate an immune response.

The technology is similar to both Astrazeneca’s and Johnson & Johnson’s vaccines, which rely on different adenoviruses.

It is the first COVID-19 vaccine developed by a Chinese company that requires only one shot.

A Sinopharm subsidiary, the Wuhan Institute of Biologics, said its vaccine candidate is 72.51% effective.

It uses the same technology as a vaccine that has already been approved from Sinopharm’s Beijing subsidiary in which a live virus is killed and then purified.

The inactivated virus is delivered via injection, triggering an immune response.

CanSino’s vaccine was jointly developed with a team led by military researcher Chen Wei at the Institute of Military Medicine under the Academy of Military Sciences in China.