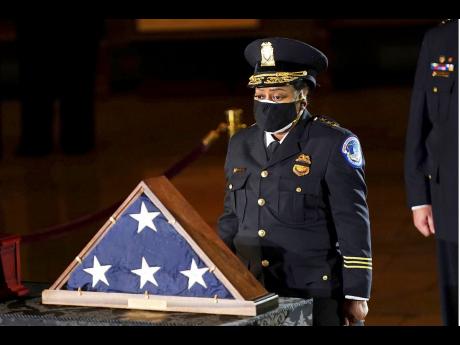 The acting US Capitol police chief was pressed to explain Thursday why the agency had not been prepared to fend off a violent mob of insurrectionists, including white supremacists, who were trying to halt the certification of the presidential election last month even though officials had compelling advance intelligence.

Acting Chief Yogananda Pittman denied that law enforcement failed to take seriously warnings of violence before the January 6 insurrection. Three days before the riot, Capitol police distributed an internal document warning that armed extremists were poised for violence and could attack Congress because they saw it as the last chance to try to overturn the election results, Pittman said.

But the assault was much bigger than they expected, she said.

“There was no such intelligence. Although we knew the likelihood for violence by extremists, no credible threat indicated that tens of thousands would attack the US Capitol, nor did the intelligence received from the FBI or any other law-enforcement partner indicate such a threat.”

Later, under questioning by the House subcommittee’s chairman, Representative Tim Ryan, Pittman said that while there may have been thousands of people heading to the Capitol from a pro-Trump rally, about 800 people actually made their way into the building.

Pittman conceded that the agency’s incident command protocols were “not adhered to,” and that there was a “multitiered failure.” Officers were left without proper communication or strong guidance from their supervisors as the insurrectionist mob stormed into the building.