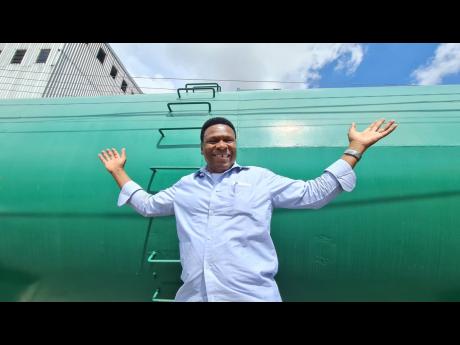 Kareem Latouche
Bencle Hibbert, stands in front of his massive water tank, at his automotive dealership. 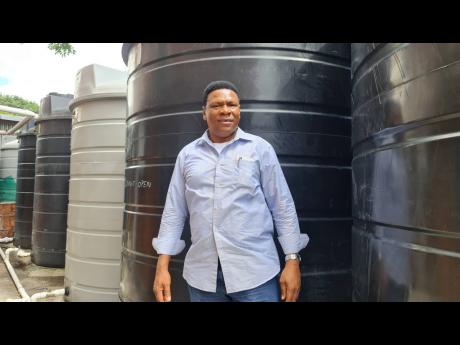 Kareem Latouche
Over the years, Hibbert has invested millions in his water catchment system. 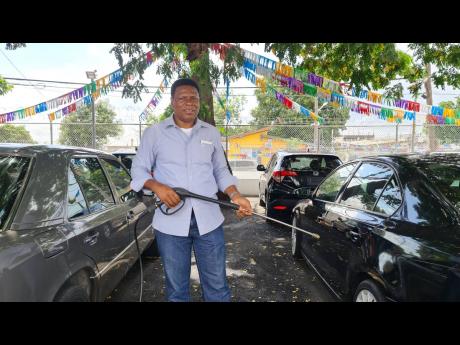 Kareem Latouche
Hibbert encourages other car marts to develop their own water system.
1
2
3

Bencle Hibbert, the owner of Wheels and Wheels Auto Imports, is not your average entrepreneur as he prides himself on going above and beyond for his company. “When I started Wheels and Wheels in 1997, my water bill from the National Water Commission (NWC) was $18,000, which was a lot of money.”

Rather than conforming to the idea of spending thousands of dollars on water bills, he opted to store his own water. “So when I look at what I had to spend on water on a monthly basis, I decided that I had to treat the water with delicacy. There and then I put in drums and built the gutters so that when the rain comes, the containers would be filled,” declared Hibbert.

Though many people would consider the execution of an undertaking like this to be burdensome, it saved Hibbert a lot of money in the long run. “I bought Yummi Motors in 2014, and my water bill there was $260,000 a month, so I put in a water catchment system for $3,000,000.”

When Hibbert totalled the amount of money he would pay, if he didn’t put in the water system, it would have cost him an estimated $22 million in water bills.

His decision to build a water-catchment system has pushed his company to the top. “At Wheels and Wheels from 1997, I would have been long ahead of the game because as it is now, I have 14, two thousand- gallon drums on the property.”

Hibbert believes that it is a good thing to conserve water for the motor-vehicle industry, and though it may cost to get workers to build the gutter and direct the water into the drums, all his companies have reaped the benefits over the years. “I love what I do. I like my water-catchment system, and it proves, to me that I am doing the right thing.”

What further propelled Hibbert to start a water-catchment system

Water lock-offs were one of the primary reasons that also pushed Hibbert to start his water-containment project. “There used to be water lock-offs in the 1990s and early 2000s, and the NWC used to visit car marts to see if the water was being conserved, and I couldn’t operate my business like that.”

He highlights that having a water-catchment system is a wise way of doing business, and if everyone practices this, Jamaica would save a lot of water. “The world has changed, but at Wheels and Wheels, we have changed for the better, where water is concerned.”

Hibbert is accustomed to challenges as the Manchester-born businessman has always had to rise in the face of adversities. “I was born in Porus, Manchester, and I know what the cost of water is and the struggle it takes to carry water from long distances by foot or on donkeys, so I knew how important water is. Therefore, I used my option, which is catching water instead of depending on NWC,” said Hibbert.

He shares that at Wheels and Wheels, their primary aim is selling cars. “It is a driven company in Jamaica and one of the largest in the car industry on the island. We are customer oriented by selling used cars and new cars from Japan, Singapore, and other parts of the world.”

Hibbert says that the car business is what he ventured into after leaving school in 1981, and from there onwards, that’s the only thing that sparked his interest. “My father sent me to learn mechanical engineering in Old Harbour for four years.”

After leaving Old Harbour in 1986, he secured his first job in Kingston in February 1987. “I worked at the Motor Sales and Service Company, now Stewarts, where I learned the ins and the outs, and while I was at Motor Sales, I started importing vehicles from America and Japan in 1988,” disclosed Hibbert.

So when asked if he was surprised at how far the company has come, he shared that the company had reached his expectations. “I am not surprised about where we are in the car industry, but I am very happy. From 1988 until now, it has been 34 years, and that is something I am very grateful for.”