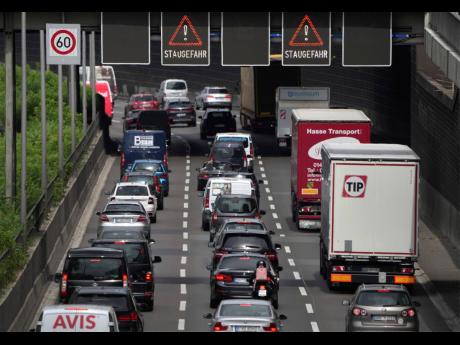 AP
FILE -- Cars and trucks drive on the A100 highway in Berlin, Germany, Wednesday, June 29, 2022. Officials said Monday that Germany is postponing politically sensitive decisions on reducing greenhouse gas emissions in the transport sector until 2023, amid strong opposition from one governing party to the idea of a universal speed limit. (AP Photo/Michael Sohn, file) 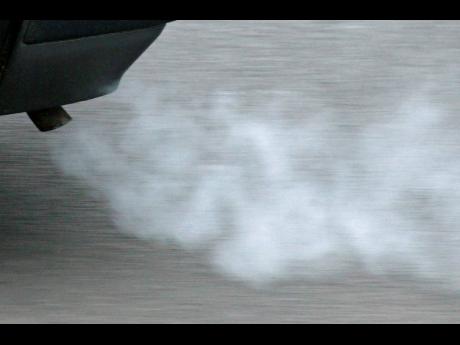 AP
FILE - A view of the exhaust pipe of a car in Erfurt, Germany, Jan. 26, 2009. The European Parliament and EU member countries have reached a deal to ban the sale of new gasoline and diesel cars and vans by 2035. EU negotiators sealed on Thursday, Oct. 27, 2022, the first agreement of the bloc’s “Fit for 55” package set up by the Commission to achieve the EU’s climate goals of cutting emissions of the gases that cause global warming by 55% over this decade. (AP Photo/Jens Meyer, file) 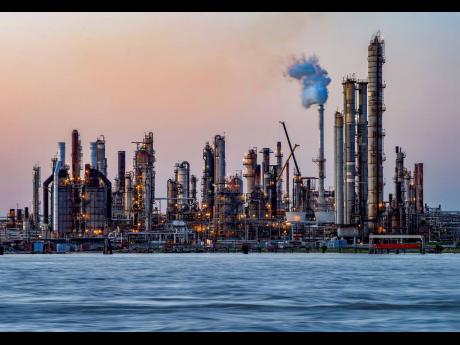 AP
FILE - The sun sets at Chalmette refinery in Chalmette, La., located just over the Mississippi River levee May 3, 2020. While the Inflation Reduction Act concentrates on clean energy incentives that could drastically reduce overall U.S. emissions, it also buoys oil and gas interests by mandating leasing of vast areas of public lands and off the nation’s coasts. (David Grunfeld/The Times-Picayune/The New Orleans Advocate via AP) 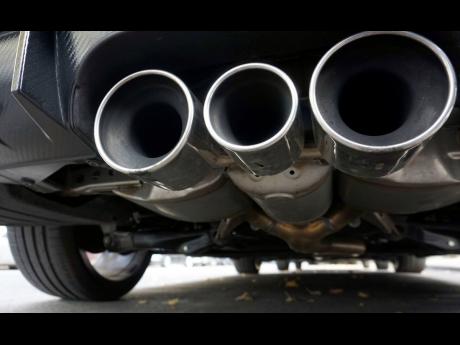 AP
FILE - Exhaust pipes of a car are pictured in Berlin, Germany, Tuesday, Oct. 9, 2018. The European Parliament and EU member countries have reached a deal to ban the sale of new gasoline and diesel cars and vans by 2035. EU negotiators sealed on Thursday, Oct. 27, 2022, the first agreement of the bloc’s “Fit for 55” package set up by the Commission to achieve the EU’s climate goals of cutting emissions of the gases that cause global warming by 55% over this decade. (AP Photo/Michael Sohn, File)
1
2
3
4

BRUSSELS (AP) — European Union lawmakers and member countries reached a deal to ban the sale of new gasolene and diesel cars and vans by 2035.

The deal EU negotiators sealed Thursday night is the first agreement of the bloc’s “Fit for 55” package, which the bloc’s executive commission set up to achieve the goal of cutting greenhouse gas emissions by 55% over this decade.

Under the deal, carmakers will be required to reduce the emissions of new cars sold by 55% in 2030, compared to 2021, before reaching a 100% cut five years later. The European Parliament and member states must formally approve the agreement before it comes into force.

The European Parliament said the deal is a signal ahead of the UN’s annual climate change conference “that the EU is serious about adopting concrete laws to reach the more ambitious targets set out in the EU Climate Law”.

According to EU data, transportation is the only sector in which greenhouse gas emissions have increased in the past three decades, rising 33.5% between 1990 and 2019. Passenger cars are a major polluter, accounting for 61% of total CO2 emissions from road transport.

The EU wants to drastically reduce emissions from transportation by 2050 and promote electric vehicles, but a report from the bloc’s external auditor showed last year that the region lacks the appropriate charging stations.

The EU Parliament said that funding should be directed to help small- and medium-sized businesses that are part of the automotive supply chain, as well as vulnerable regions and communities, weather the transition to ending sales of cars that run on gas and diesel.

World leaders agreed in Paris in 2015 to work to keep global temperatures from increasing more than 2 degrees Celsius (3.6 degrees Fahrenheit), and ideally no more than 1.5 degrees C (2.7 F) by the end of the century. Scientists have said even the less ambitious goal will be missed by a wide margin unless drastic steps are taken to reduce emissions.

“This is a historic decision as it sets for the first time a clear decarbonisation pathway — with targets in 2025, 2030, and 2035 and aligned with our goal of climate neutrality by 2050,” Pascal Canfin, the chair of the environment committee of the European Parliament, said. “This sector, which accounts for 16% of European emissions at the moment, will be carbon-neutral by 2050.”

Greenpeace said the 2035 deadline is too late to limit global warming to below 1.5 degrees Celsius (2.7 degrees Fahrenheit).

“The EU is taking the scenic route, and that route ends in disaster,” Greenpeace EU campaigner Lorelei Limousin said. “A European 2035 phase-out of fossil fuel-burning cars is not quick enough: New cars with internal combustion engines should be banned by 2028 at the latest.”

Limousin called the deal announcement “a perfect example of where politicians can bask in a feel-good headline that masks the reality of their repeated failures to act on climate”.