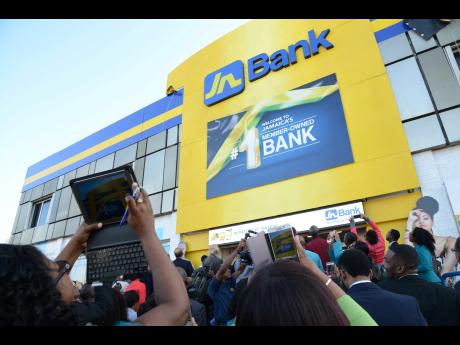 Rudolph Brown
Persons take pictures of the new JN Bank sign at Half Way Tree in Kingston at the lauch of the bank on February 1, 2017.

JN Bank customers who conduct transactions using third-party cheques denomi-nated in Canadian currency, particularly pensioners, will no longer be able to process those transactions through the bank.

In a note to its customers, the bank advised the change is "due to changes in our banking arrangements in Canada".

"Our local bankers have indicated that they will not accept third-party cheques," JN Bank told Gleaner Business via email.

"JN is not happy with the decision, however, we have no option at this time. We are working to find a solution for our members and customers," the bank said.

Third-party cheques are those issued by a person or entity as payment to another.

Going forward: "The only Canadian currency cheques that will be accepted by our bankers are cheques that are payable to JN Bank Limited". Pensioners and who receive payment from the Canadian government "and other parties will be affected," JN Bank said. The impact will be felt by less than one per cent of its members, it added.

JN transitioned from a building society this month, but remains owned by its members.

The bank said measures are being taken to restart the acceptance of CND third-party cheques, but in the meantime, it suggests that customers should have payments wired directly to their JN Bank accounts.

Pressed on whether the change was another effect of the fallout from foreign correspondent banking relationships, the bank did not comment precisely. It attributed the problem to its "local banks".

JN has felt the impact in its Cayman Islands and United Kingdom markets.

Last July, then as JNBS, it collaborated with Victoria Mutual Building Society to provide options for their clients. The partnership was cobbled after their UK banker gave notice that it would cease to do business with the Jamaican societies, both of which have operations in the UK.

In August, JN further partnered with Citibank to facilitate funds transfers and pension payments for its UK clients who were affected by the fallout of correspondent relations with its UK banker.

JN's remittance service in Cayman also hit a snag last year when the Cayman National Bank gave notice that it would close the bank's accounts in a bid to rid itself of the perceived exposure to the money-transfer market, which is considered by foreign banks to be at risk for money laundering.