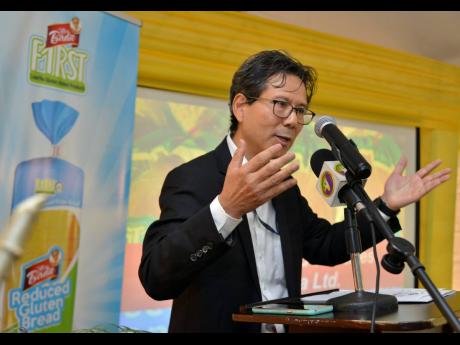 Kenyon Hemans
An image of one of the F1RST reduced-gluten products is displayed as Managing Director of Consolidated Bakeries/Purity Jamaica Anthony Chang speaks at the launch of the new product line on Wednesday, June 19. 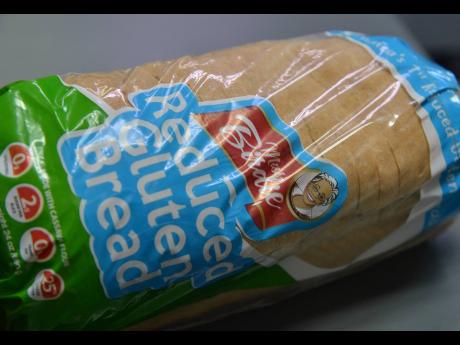 Kenyon Hemans
A reduced gluten-bread made under the F1RST line by Consolidated Bakeries/Purity Jamaica.
1
2

Consolidated Bakeries Jamaica Limited, which trades as Purity Bakery, has pumped roughly $10 million in bringing to market a line of low and gluten-free products under its Miss Birdie brand.

The investment forms part of a $20-million project the company undertook in 2017 to improve efficiency and increase the productivity of its plant on Red Hills Road, Kingston.

Raw material is sourced from about 50 cassava farmers across the parishes of St Elizabeth, Clarendon and St Catherine.

Miss Birdie’s N’uffins hit supermarket shelves in January and was followed by the release of the Miss Birdie reduced-gluten bread in March. But that was just the start of a portfolio of products from the company which is getting more aggressive on tapping into the natural food movement.

“We are targeting people looking for a healthier lifestyle, but also people who want to support local products. We also intend on going beyond these products ... we looking at 100 per cent gluten-free bread and other products, too,” Chang told Financial Gleaner during the launch at the company’s Valentine’s Drive head office in Kingston.

He is optimistic that the company can recover the money spent on launching the product by year 2021.

While Consolidated Bakeries looks to secure market share for its low and no-gluten-added products across Jamaica, the baking company also has its eyes on exporting the products to markets it already has a toehold in, including the Cayman Islands, United States, Canada and the United Kingdom.

“We got a lot of interest from international markets for our products from the JMEA Expo, it’s just to get our facilities and processes organised, and that is what we are working on,” Chang said.

Locally, the F1RST products are currently available at two grocery outlets in Kingston – Sovereign and General Foods supermarkets in Liguanea. However, there are plans in place to supply the products in the supermarkets and retailer stores of “major towns”.

“We will be putting the products in a few stores in a couple of weeks. We have to go to retailers and we need them to be encouraged to try it. I want as many retailers to support us,” Chang said.

Consolidated opted to develop a “small” plant for the F1RST line to avoid cross-contamination with its current line of products. The bakery uses unbleached, bromate-free flour and eliminates trans fat, animal-based fat, and high-fructose corn syrup from its product formulation for the new products, Chang said.

The production process begins with a control panel that weighs and scales the dough before it is sent to a pan and later, a divider system that grounds it and gets the dough ready. The dough is then moulded into a log shape and baked in a 65-foot tunnel oven for 35 minutes. It is then cooled and sent to a de-panner system to test for market readiness, and later sliced and bagged.

While tight-lipped on the targeted output for the new products, Chang told the Financial Gleaner that the production line is currently running at less than 50 per cent capacity.

The company has added five staff members to man the new line.