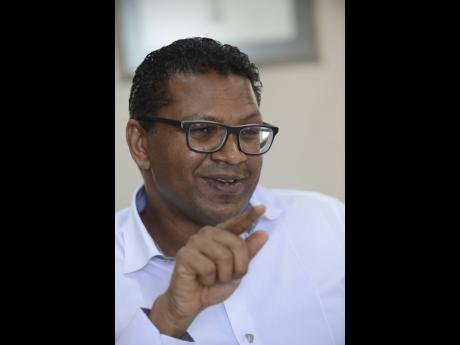 Four years into his role as CEO of Seprod Limited and an equal number of years of campaigning to push growth in Jamaica’s agriculture sector, it was a moment of “mixed emotions” for Richard Pandohie, who has been appointed the new president of the Jamaica Manufacturing and Exporters Association (JMEA).

“On one hand, I feel extremely privileged to be selected by you to lead this association. On the other hand, I feel overwhelmed as the magnitude of the task and expectations sink in. I am comforted by the fact that this association is built on a legacy of teamwork and an incredible support structure,” Pandohie said on Thursday upon his election to the presidency.

Pandohie, who previously held the post of deputy president at the JMEA, has been called upon to play a greater role as primary representative of Jamaica’s manufacturing and export sector.

In recent years, he had a no-holds-barred position on calling out the Government for insufficient focus on agriculture which, ultimately, impacted the outputs of manufacturers who look to farmers for raw materials.

He was one of the drivers of the ‘Drink Real Milk’ campaign aimed at driving up local milk production by 20 million litres annually as he sought to re-establish a sustainable and self-sufficient dairy industry, which has seen a sharp and consistent decline from 38.8 million litres in 1992.

He was also recognised for lobbying with state regulator Sugar Industry Authority for marketing-agency status, which allows a private company to find its own sugar markets. And he was one of the first to complain to the Anti-Dumping Commission about the dumping of flour, said to be imported from Trinidad & Tobago, into the local market. The situation, he charged, was causing material damage to the local flour industry and presented a clear and present danger for all.

“Jamaica’s manufacturing and export sector is not what it was. Decades of underinvestment, high interest rate policy, high energy costs, migration of skilled workforce, among other factors, have led to severe contraction of the industry, dropping us from the heady days of 20 per cent of GDP and 120,000 employees to our current 8.6 per cent of GDP and 79,000 employees,” the new president said at the JMEA annual general meeting.

“However, those nightmare days are behind us, and the well-publicised improvements in our economy have led to stabilisation and a definite reversal in risk appetite and investment. The record level of business confidence has seen many companies retooling and investing in new operations, but we are still a good distance away from where we need to be as we play catch-up to the rest of the world,” he added.

In his new role as JMEA President, Pandohie highlighted that his areas of focus would include engaging the Government to have a portion of the research and development investments recovered against taxation; pushing for lower interest rates for the MSME sector; lobbying for further reduction in the cost of doing business, including the cost and obstacles to export; and working side by side with the foreign ministry as they negotiate trade deals.

He will also renew calls for anti-dumping duties against imports from certain countries in order to protect the local industry; push for lowering of the General Consumption Tax rate while broadening the tax base; and propose a task force comprising The Ministry of Industry, the PIOJ, STATIN, Trade Board, and the JMEA to review the reported contribution of the productive sector, which he believes is understated in contributions to GDP, percentage of value added, and employment numbers.

Pandohie was managing director of cigarette distributor Carreras prior to joining Seprod.