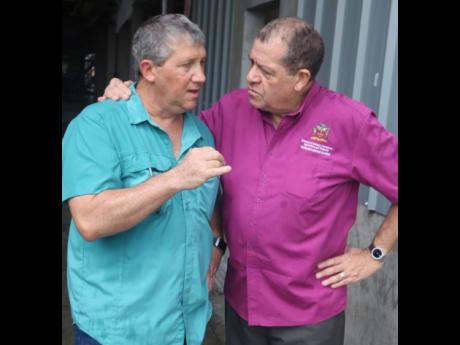 Trade Winds Citrus has pitched to the portfolio minister for agriculture, Audley Shaw, a plan to quarantine the first shipment of a new breed of cows from Costa Rica in a continued lobby for import permits that it has been chasing for nearly two years.

In 2017, the juice and beverage manufacturer invested in a new production line that should have marked its entry into the dairy market, but is yet to put the equipment to use in light of concerns that the cows to produce milk for raw material could infect the local herd, Jamaica Hope.

Costa Rica is considered worldwide as a country with negligible risk of bovine spongiform encephalopathy, BSE, which is popularly known as ‘mad cow’ disease.

Managing Director of Trade Winds Peter McConnell says Jamaica could double its milk production over the next 12 months without putting the country at risk of the disease.

“I’m willing to build a dairy herd from scratch with all the highest quarantine facilities. The day a cow sneezes and we test it and it is diseased, we will destroy it. But we have to get going, otherwise, in five years we will still be importing powdered milk,” he said during a tour of Trade Winds’ farms on Wednesday.

On average, a cow would need to be quarantined for 14 days to determine if it is disease free.

Trade Winds’ attempt to diversify from a monocrop company follows on losses the company has suffered over the past three years from citrus diseases, primarily tristeza and citrus greening. They resulted in the wipeout of 880 acres or 60 per cent of Trade Winds farms and a one-third reduction in its production numbers.

In an attempt to recover some of the losses, Trade Winds last year announced that it had prepared 75 acres of land for pineapples to be sold as fresh fruit for the local market as well as a replacement for pineapple concentrate in its juices.

The $100-million project is expected to bear fruit in February and is projected pay for itself over the next two years. In the meantime, McConnell hopes to get the milk project off the ground over the next month, ultimately resulting in Trade Winds’ own brand of milk on supermarket shelves within a year.

“Our plant is ready and waiting for the raw material. I cannot find enough cows to buy to get started, 70 per cent of our milk is now imported in the form of powder,” McConnell said.

Trade Winds has engaged a Costa Rican who will ship the Girlando cows – a hybrid developed for tropical countries like Jamaica with milk yield of up to 22 litres per day, doubling that of the Jamaica Hope.

McConnell has earmarked 550 acres of the lands it lost to the citrus diseases to raising 500 cows. Once the permit has been approved for the import of the animals, the unnamed Costa Rican partner is expected to ship a minimum of 200 cows to Jamaica.

The cows will be between one and a half to three years old.

“We applied for permits to import live animals or embryos. But I would prefer if we got the permit to import the live animals. We would have to wait three to five years with the embryos, but if we bring in the animals we can start producing milk in a shorter time frame,” McConnell said.

McConnell did not disclose what it would cost the company to build the quarantine facility, but said he was prepared to invest “whatever it takes” to have the project operational.

Minister Shaw told the Financial Gleaner he will consider Trade Winds’ quarantine proposal in a meeting with Veterinary Services Division’s chief officer Osbil Watson and McConnell, to be held by today, Friday.

“I have to treat this matter with great urgency. I have instructed a member of my team to have a meeting with Peter McConnell, Doctor Watson and myself to go into the specifics of McConnell’s proposal because I like it,” said Shaw.

“What I do know is that there have been concerns about whether there is a particular type of disease that is in places like the Dominican Republic and Costa Rica that could potentially threaten our cattle in Jamaica.” he said.