UPDATE: Lenders aiming for $100b of loans to SMEs 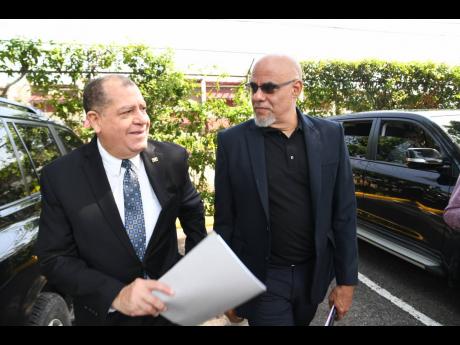 Rudolph Brown
Rudolph Brown/Photographer PSOJ Vice-President Keith Duncan (right) escorts Minister of Industry, Commerce, Agriculture and Fisheries Audley Shaw at the launch of the PSOJ/JBA workshop ‘Time for Growth: Unlocking the Power of the SME’, at the Terra Nova All-Suite Hotel in Kingston on Wednesday, July 3.

The Access to Finance Facilitation Panel, a group made up of the Government, private institutions and business development organisations, is exploring movable assets as security for loans as one of the measures aimed at hitting a $100 billion target in private sector credit to small and medium enterprises, or SMEs, by 2020.

The movable asset-based lending initiative, which already has success in Bosnia, Guatemala and Peru, will see small business operators repaying loans from operating cash instead of from company profits.

It means that SMEs across Jamaica should soon be able to access loans from the commercial banks, backed by assets such as accounts receivables, inventory and equipment.

But this latest push to “unlock the full potential of the SMEs” also unlocked the frustrations of small business owners, who chastised lenders for the speedy processing and payout of motor vehicle loans while business operators are left to the “mercy of the banks” when trying to access loans to expand their businesses.

“I’m tired of the talking with the banks, I’ve heard this too many times. All I’m interested in seeing is a brown bag full of money in front of me,” declared Michelle Smith, owner and CEO of Chocolate Dreams.

“Stop talking about you guys understand, because you don’t. You don’t know what small business operators are going through. You don’t visit our business places. You sit behind a desk in high heels and ties,” Smith said as she chided lenders at the launch of the PSOJ/JBA Partnership for SME Empowerment workshop.

“I got approved for a loan last year which was intended to buy goods to prepare me for December. But by time the money reached me, the peak period passed and now the bank is calling to tell me that they want their money. The tax man hates me because I’m brown-skinned and they think I have money, but sometimes I have to make a decision between paying my taxes or paying the 28 staff members I have to go look after their families,” she said. “I took a risk with starting up my business; the banks should be open to taking calculated risks too.”

Wednesday’s SME Empowerment Workshop is the first of a five-part series which aims to determine effective methods of improving the quantity, quality and relevance of training available to SMEs, while addressing how SMEs are screened for loans. The initiative is expected to run for a year.

“We hear the complaints and the truth is that we need to change, become more flexible, and find viable, efficient and profitable ways of better unlocking capital for SMEs who will, in turn, have better access to capital to grow their business. The bankers are committed, but we also need you to be open-minded ... focus on the solutions,” President of the Jamaica Bankers Association, David Noel, said during the launch at the Terra Nova All-Suite Hotel. Noel is also President and CEO of No. 2 bank, Scotia Group Jamaica.

The push towards movable asset-based lending, from collateral-based lending, for SMEs comes within a context of high liquidity levels and narrowing net interest margins of the financial sector. Today, interest rates for corporate, car and home loans run as low as six per cent, while private-sector credit averages 15 per cent.

Aside from lending based on company’s assets, commonly known as a line of credit, the $100b initiative, which is backed by the Ministry of Industry, Commerce, Agriculture and Fisheries – MSME Unit; Jamaica Bankers Association; EXIM Bank; Small Business Association of Jamaica; and the Development Bank of Jamaica, DBJ, is also aimed at increasing credit to SMEs through factoring, reverse factoring and leasing arrangements.

Both line of credit lending and factoring — a financial transaction and a type of debtor finance in which a business sells its accounts receivable invoices to a third party at a discount to meet its present cash needs — are offered by a few institutions in Jamaica, including the EXIM Bank; Sygnus, through its credit investments division; and microfinance company Sprint Financial Services from a deal it brokered with the Jamaica Manufacturers’ and Exporters’ Association last year.

First Global Bank and Sagicor Bank also tailor loan products to suit businesses in the SME space, but the Facilitation Panel hopes to get more financial institutions involved in the growth of the sector.

“World Bank researchers examined the impact of movable collateral registries in countries. Results found that it improves access to finance in almost all of its different aspects,” Vice-President of the Private Sector of Jamaica, Keith Duncan, told the Financial Gleaner. Duncan is also CEO of JMMB Group, whose businesses includes a local commercial bank.

Locally, the DBJ is working to finalise the reverse factoring framework which will allow a supplier who normally waits 90 days to get paid, to receive payment within five or three days. Earlier this year, the Bank of Jamaica allowed the banks to adopt the provisions of the Security Interest in Personal Property Act, which cleared them to take moveable assets as collateral for loans.

SMEs have been able to use moveable assets as collateral since 2013, and BOJ’s clearance allowed the banks to align with the market.

“Jamaica has most of what we need … and if we maximise what we have, we can get the full impact like these other countries that have been using it,” Duncan said.

CORRECTION: The target for lending to small businesses was reported as $100 million, based on annualised data. However, the correct estimate is $100 billion. The adjustments have been made throughout the story.