DBJ to seek billions in funding 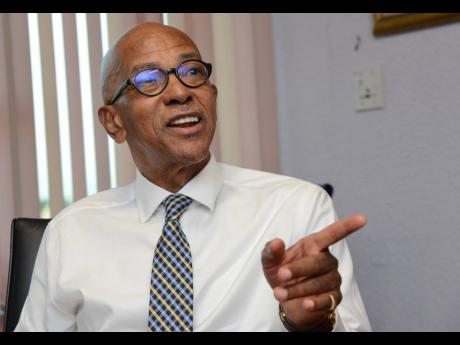 The upgrades in its corporate credit ratings to CariA- and CariA by regional rating agency CariCRIS has Milverton Reynolds, the managing director of the Development Bank of Jamaica, DBJ, even more optimistic about plans to tap the market for funding by next March.

Last Monday, Caribbean Information and Credit Rating Services, CariCRIS, lifted DBJ’s rating up one notch driven by the improved credit risk profile of the Government over the last 12 months on account of the ongoing IMF-led fiscal consolidation that has resulted in steady real GDP growth of just under 2 per cent in 2018.

The upgrade was also as a result of improved overall fiscal operations, healthy primary surpluses, and a declining debt/GDP ratio estimated at around 96 per cent as at March 2019, down from 101 per cent in March 2018.

CariCRIS also maintained a stable outlook on the ratings based on expectations that the Government’s lead development financier and divestment manager of state assets will continue to perform well, with profitable operations over the next 12-15 months, in addition to ongoing improvement in the fiscal and economic conditions in Jamaica.

With the rating upgrade, Reynolds has expressed confidence about approaching international institutions in DBJ’s quest to better finance the micro, small- and medium-sized enterprises, which are estimated to contribute 80 per cent of the country’s GDP annually.

The DBJ expects the rating upgrade will open doors for the bank when it goes hunting for funds.

“Given the fact that for some time there were no Government guarantees available when we were looking financing, we had to make sure that we could access financing based on the strength of our balance sheet,” Reynolds told the Financial Gleaner.

Reynolds did not disclose the specific amounts that DBJ wants to raise, saying that the DBJ board was said to be in an early stage of the discussion. Nevertheless, he anticipates that the deal should be closed by the end of its financial year, March 2020.

“We have already secured the funding that we need for our financial year, but it is also good to make sure that you examine and look at the funding sources that are available to you. So right now, if we were to go back to market, it would be several billions,” Reynolds said.

Since the start of the year, DBJ was approved by the Inter-American Development Bank, IDB, for US$20 million ($2.6 billion) of financing for its credit enhancement fund. The state-owned financier was also approved for US$5 million ($558 million) from the World Bank to establish an SME venture capital fund later this year.

DBJ has so far committed US$2.25 million (nearly $300 million) to three private-equity funds this year. On Wednesday, the institution was also named a partner under the Access to Finance Facilitation Panel, which seeks to increase private sector credit to micro, small-and medium-sized businesses.

“For the Access to Finance Facilitation Panel, that funding is being put in place between the IDB and the World Bank. We just entered discussions, primarily with the IDB, to finalise the terms of those arrangements,” Reynolds said.

DBJ is also seeking additional capital to finance the growing BPO/ICT – business process outsourcing and information, communication and technology – sectors, which, according to Reynolds, is critical to job growth.

“We will need additional funding if we are going to be looking at strategic sectors that will grow the economy, exports, agriculture, agro-processing,” he said.

While the institution pushes to provide loans to business owners that have been rejected by the banks, Reynolds told the Financial Gleaner that DBJ has an “excellent” loan portfolio.

“Non-performing loans of the institution account for less than 1 per cent of the portfolio,” he said.

“We are going to be making a big announcement on that. I can’t speak about it now, but it will definitely allow any MSME who is having difficulty getting a loan because of lack of collateral to get financing,” he said.