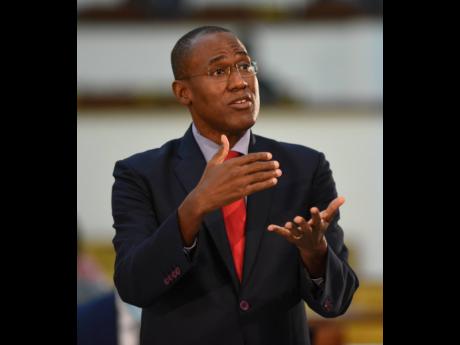 Rating agency Standard & Poor’s, S&P, maintained Jamaica’s credit rating at B+, this week, but warned there was a one-third chance it would lower the rating within a year unless the country grows.

Its outlook on Jamaica was negative.

On Thursday, Finance Minister Dr Nigel Clarke sought to downplay the agency’s gloomy outlook, saying the economy should grow next fiscal year as the contraction it is now experiencing is not structural in origin.

The Jamaican economy has shrunk 10 per cent, due mostly to the eviscerated travel and tourist markets that have been heaviest hit by the pandemic.

“The contraction we are experiencing doesn’t have to do with any structural issues or factors, but it is based on the inability of economic agents and individuals to move about freely and to transact as they normally would,” Clarke said at a press conference held Thursday at the Ministry of Finance in Kingston. “A vaccine offers prospects of a return to levels of economic activity that can support economic growth,” he said.

However, S&P still expects the pandemic’s impact to ease in 2021, and that Jamaica would “return to economic growth” and resume its debt reduction programme.

Jamaica almost always experiences a double-dip contraction or negligible growth following major crises, whether from heavy storms or external events. Clarke, while acknowledging the history of low growth recovery after shocks, stressed that in this instance the economy had previously made a decisive shift towards resilience.

“In the past we were not just fighting recovery but also fighting stability,” he told the Financial Gleaner.

With nine months having elapsed since Jamaica’s first case of COVID-19 was detected, interest rates, the currency and inflation are performing to pre-pandemic expectations, he said.

The national budget was twice adjusted, initially in May to deal with the estimated $120 billion price tag related to Jamaica’s COVID response and then again in October.

“Our budget is on track so far, but we still have four important months to go,” Clarke said. “So in the worst economic crisis in 100 years, Jamaica is able to make economic plans for the future,” he said.

Clarke noted that the Planning Institute of Jamaica, Bank of Jamaica, the rating agencies and the International Monetary Fund all expect growth next year for Jamaica. On that basis, he reasoned that S&P’s unchanged rating was a signal of confidence in the economy. BOJ projects the economy will grow by three per cent.

“It is a sign that good policy pays economic dividends,” the minister noted. “We want the policies we pursue in lean times to shorten those downturns, to cushion the impact, and return Jamaica to a path of expansion in the quickest possible time.”

He adds that S&P recognises that by strengthening its institutions, Jamaica was improving the economy to provide support during countercyclical periods.

That said, the rating agency is watching to see whether Jamaica does produce growth in fiscal 2021-22 while reducing debt levels.

“The negative outlook reflects our view that there is at least a one-in-three chance that we could lower the ratings on Jamaica over the next 12 months if the strong economic recovery that we expect in 2021 is weaker, or the pandemic is more prolonged, than our base case. If such a scenario were to result in prolonged deficits at current high levels, or weaker external accounts, we could lower the ratings,” S&P said.

To that Clarke said that still meant there was “a two-in-three chance that the rating will remain the same”.

For this fiscal period ending March 2021, BOJ projects the economy will contract seven to 10 per cent. However, the central bank is forecasting growth within a range of 3.0 per cent to 8.0 per cent in 2021-22.

The country has not achieved 3.0 per cent growth in 20 years, but at the same time it has never experienced such a contraction, since the recording of economic performance in independent Jamaica.

Over the past two decades, Jamaica recorded its highest growth of 2.9 per cent in 2006 and its biggest contraction of 3.1 per cent in 2009, according to data published in the PIOJ’s Economic and Social Survey Jamaica report.

Alternatively, S&P could revise the outlook to stable over the next 12 months if risks of a more severe or prolonged outbreak were to subside, the country’s public finances began returning to previous levels, and its external position remained in line with S&P’s forecast.