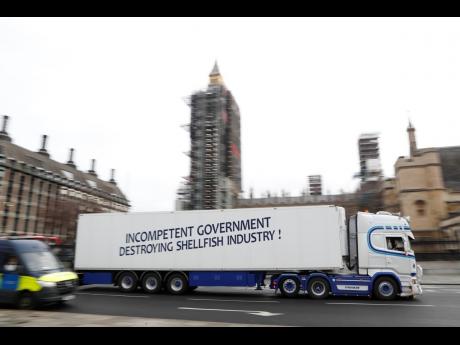 AP
A shellfish export truck with a protest sign written across the trailer, ‘Incompetent Government Destroying Shellfish Industry!’, drives past the Palace of Westminster in London on Monday, January 18, during a demonstration by British shellfish exporters to protest Brexit-related red tape they claim is suffocating their businesses. 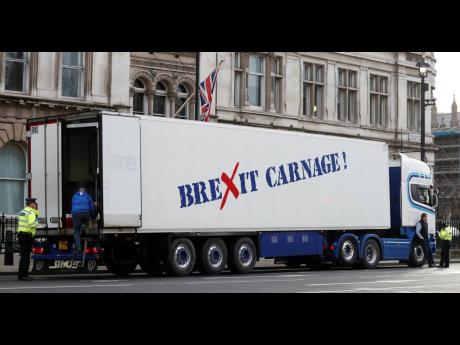 AP
A policeman escorts the driver of a shellfish export truck as he is stopped for an unnecessary journey in London on Monday, January 18, during a demonstration by British shellfish exporters to protest Brexit-related red tape they claim is suffocating their businesses. 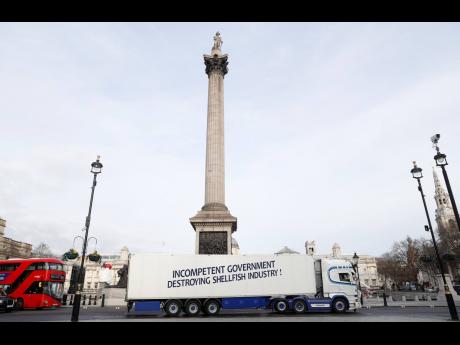 AP
A shellfish export truck with a protest sign written across the trailer, ‘Incompetent Government Destroying Shellfish Industry!’, drives around Trafalgar Square in London on Monday, January 18, during a demonstration by British Shellfish exporters to protest Brexit-related red tape they claim is suffocating their businesses. 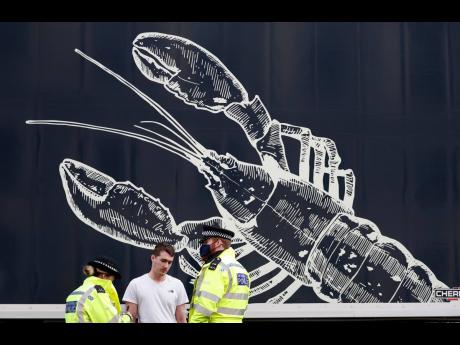 AP
Police speak to a shellfish export truck driver as he is stopped for an unnecessary journey in London on Monday, January 18, during a demonstration by British shellfish exporters to protest Brexit-related red tape they claim is suffocating their business. The drivers were later stopped by police and issued with fines for an ‘unnecessary journey’ due to the national lockdown to curb the spread of the coronavirus.
1
2
3
4

Trucks owned by United Kingdom shellfish firms descended on Britain’s Parliament on Monday to protest the Brexit-related red tape they claim is suffocating their businesses.

More than a dozen large lorries – one bearing the words ‘Brexit carnage!’ – drove past the Houses of Parliament in central London and parked outside Downing Street, home to British Prime Minister Boris Johnson.

Police spoke to the drivers, who could face fines for breaching coronavirus restrictions by making non-essential journeys.

British fishing communities were among the strongest supporters of leaving the European Union, EU, because it promised the chance for the UK to leave the bloc’s complex system of fishing quotas and regain control over who is allowed to fish in British waters.

But now some in Britain’s fishing industry say they are facing ruin because of new barriers to shipping their catch abroad. Last week, one Scottish fishing boss threatened to dump his rotting catch on politicians’ doorstep if the situation did not improve.

Fishing rights became a major sticking point in the trade negotiations that followed the UK’s political departure from the bloc in January 2020, as European nations sought to retain access to waters where they have fished for decades or even centuries.

Under a new post-Brexit UK-EU trade deal signed last month, the EU’s share of the catch in British seas will be cut by 25 per cent over a 5½-year transition period. After that, new quotas will have to be negotiated.

At the same time, Britain’s exit from the EU means new costs and red tape for exporters – a major problem, since Britain exports most of the fish its boats catch.

Some fishing companies say the new restrictions have made it impossible to ship their catch to Europe. Some British fishermen have begun landing their catch in EU member Denmark to keep it in the bloc.

“If this debacle does not improve very soon, we are looking at many established businesses coming to the end of the line,” said Alasdair Hughson, chairman of the Scottish Creel Fisherman’s Federation.

“From seabed to plate, this is not an easy business. People put their heart and soul into making it work, with ridiculously long hours,” he added.

Johnson has called the issues “teething problems” and promised to compensate firms for losses that are due to “bureaucratic delays”.

But he also claimed fish firms’ problems were due in part to restaurants being closed during the coronavirus pandemic. And he said “there are great opportunities for fishermen across the whole of the UK to take advantage of the spectacular marine wealth of the United Kingdom”.

Fishing is not the only part of the British economy to experience a bumpy start to 2021 because of Brexit.

The trade deal that took effect on January 1 allows Britain and the EU to trade in goods without quotas or tariffs. But that is a far cry from the seamless, hassle-free trade the UK enjoyed while it was part of the EU’s single market. Companies face customs declarations, border checks and other barriers when they ship goods to and from the bloc. The change has led to shortages of some goods on supermarket shelves as firms reduce the number and amount of shipments they make.