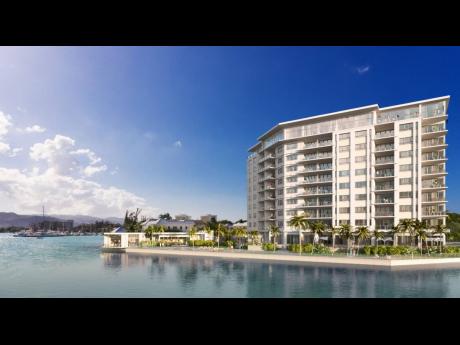 The imposing 10-storey Soleil Residences condominium complex is the newest development along the Montego Freeport peninsula in Montego Bay, an area that has become a location for high-end resort living in western Jamaica.

One real estate company is advertising two three-bedroom condos at Soleil, located near the end of the Freeport spit, close to the Montego Bay Yacht Club and overlooking the cruise ship pier, for US$925,00 and US$975,000, or approximately $132 million and $140 million, respectively.

The price range is in the same general ballpark as the cost of listed three-bedroom condominiums at the swanky Jewel Jamaica Grande resort at the other end of the city, along the resort city’s so-called elegant corridor.

Realtor Nicola Delapenha of real estate firm Coldwell Banker Jamaica says the 55 units at the Soleil have nearly all been sold out, with just the two suites still unsold. The development has been on the market for just over two years, units having being marketed since the complex was in the planning stages. A marketing brochure lists the complex as offering one, two and three-bedroom residences as well as three-bedroom luxury units, with many affording views of the Montego Bay harbour.

Of the two units still unsold, one became available because “somebody had to drop out at the last minute because of the impact of the pandemic,” Delapenha said.

The Soleil was developed on three acres of land by Sharkfin Development Limited, a company incorporated in 2007 and which lists as its sole shareholder, Brian Jardim, a well-known Montego Bay-based businessman and son of the late hotel mogul, Gordon ‘Butch’ Stewart. Companies Office of Jamaica records also list the company’s directors as Jardim, Edward Azan, Paul Soutter, Paul Burke, and Richard Hamilton as company secretary.

The developers of the property have avoided media publicity. A real estate source, who requested anonymity, said that even among professionals in the industry, there has been little information about the details of the development.

Jardim declined to comment, asking that queries be directed to real estate developer Edward Azan. Azan told the Financial Gleaner that the development was undertaken as a joint venture, but did not elaborate on who the joint-venture partners are.

The size of the investment in the project was not disclosed, but information from the developers this week said it was financed by a loan from National Commercial Bank and though presale income. Based on the sale prices for the units, Soleil could deliver revenues of around US$40 million, or about $5.7 billion, according to Financial Gleaner calculations. The amount invested in the development would fall somewhere below the revenue earned, that is, the sale price less the profit margins build into the unit prices.

Conceptualised six years ago, construction of the Soleil started in 2018 and was completed within 20 months, in the summer of last year. It consists of two penthouse suites; eight luxury three-bedroom apartments, which sell for US$975,000; 18 three-bedroom units priced at US$925,000; 18 two-bedrooms with a selling price of US$625,000; and nine one-bedroom apartments with a selling price of US$425,000.

Already, at least one apartment owner at the Soleil has advertised a three-bedroom unit for rental at US$3,500, or more than $500,000, per month.

The Montego Freeport has long been known for the cruise ship pier and adjoining shopping centre that has largely been converted into offices, the yacht club, a special economic zone hosting several business process outsourcing companies, and other commercial developments. For many years, the former Seawind Beach Resort, now Sunscape Splash Montego Bay, was the only hotel on the peninsula, with the Seawind Apartments the only residential property in the area, that is home to a large part of the protected Montego Bay Marine Park.

Over several years, the Lagoons waterfront homes, many with jetties for boat access, and the Secrets Wild Orchid and Secrets St James hotels, joined the residential and resort buildout in the area. A still-unnamed development to be undertaken by Kingston-based property and investment conglomerate PanJam Investment Limited, which is expected to host a business hotel, residential condominiums and retail shops, is planned for five acres of land adjoining the cruise ship pier.