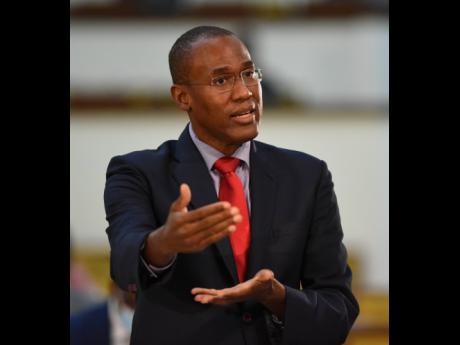 A recommendation for changes to the calculation of the capital adequacy ratio for general insurance companies is now being reviewed by the finance ministry and legislation is being drafted to the give effect to either a new minimum capital test or...

A recommendation for changes to the calculation of the capital adequacy ratio for general insurance companies is now being reviewed by the finance ministry and legislation is being drafted to the give effect to either a new minimum capital test or MCT ratio, changes to the method of computation, or both.

Minister of Finance Nigel Clarke has confirmed the ministry’s receipt of the recommendations from insurance regulator, the Financial Services Commission, FSC. The new draft law is to make its way to Parliament soon, according to Clarke, who stopped short of giving a specific timeline.

The minister told the Financial Gleaner that the recommendation was before his ministry following extensive consultations with industry players and local and international experts.

“The FSC made certain recommendations after a long process of review and consultation. They started when we were under the standby facility (with the International Monetary Fund). We consulted with the Fund and with other overseas technical experts. The FSC would have considered their position and they made a recommendation to the Ministry of Finance to make certain revisions to the MCT process that has been under review,” he said.

Acting on the proposed revision recommended by the FSC, Clarke added, requires regulatory change that has to be tabled in Parliament.

The minister’s response provides some indication of the nature of the FSC’s recommendation as being in line with what industry sources say the insurance sector has been proposing for the past several years. One industry leader, who requested anonymity based on the non-conclusion of discussions with the authorities and the confidential nature of those talks, said changes to the computation of the 250 per cent MCT capital adequacy and solvency measure for general insurers, and the minimum continuing capital surplus or MCCRS requirements for life insurance companies, were among the issues raised by the sector in the talks with the FSC.

Among specific concerns raised by the insurers, particularly at the height of a nationwide shutdown of business activities in the early stages of the COVID-19 pandemic, was the factoring of receivables into the capital levels of insurances firms. It is felt that rather than parking cash on hand to meet capital adequacy regulatory requirements, the revision of the methodology would free up capital to pay claims from policyholders and for investing and promoting growth in the economy.

While the MCT modifications appear to be well down the wicket, up to three months ago life insurance companies were still being stress tested by the FSC. The results were expected to guide its recommendations to the finance ministry regarding capital adequacy for life insurers.

“With life companies going through the quantitative impact study, we wait to see what that brings up,” Insurance Association of Jamaica president and general manager of JN General Insurance Oliver Tomlinson told the Financial Gleaner at the time.

Jamaica’s insurance sector comprises 19 registered companies, with $440 billion in assets among them, up to the March quarter of last year, mostly capturing activity before the pandemic. The solvency ratio for the life insurance companies was then estimated at 43.7 per cent, more than four times the FSC regulatory benchmark of 10 per cent; while general insurers had a ratio of 38.7 per cent, which was above the FSC regulatory benchmark of 25 per cent, according to available data on the sector.

Capital adequacy in the financial services sector locally and globally has taken on renewed monitoring and regulatory focus with heightened concern about the risks posed to banking and non-banking fincos by the ongoing pandemic and other possible shocks. In recent months the Bank of Jamaica has issued prudential reports flagging the need to “mitigate and prevent excessive credit growth and leverage; mitigate and prevent excessive maturity mismatches and market illiquidity; limit direct and indirect exposure concentrations; limit the impact of interconnectedness and systemic importance; and strengthen the resilience of the financial system.”

It has also issued a consultation paper which contemplates the implementation of more rigorous Basel III capital adequacy monitoring and reporting standards across the financial sector in keeping with global best practices. The move by the central bank acts on at least one of the recommendations of the IMF in a 2018 Jamaica financial sector stability assessment report that accompanied the fourth review of the standby arrangement which the country had then with the Fund.

The IMF called for the further strengthening of resources and skills devoted to the assessment of risks arising from interconnectedness in Jamaica’s increasing interconnected financial system, where few large financial groups operate in multiple finance-related activities across different countries, thereby increasing risks of contagion across sectors and jurisdictions should there be adverse developments in any one market or globally.