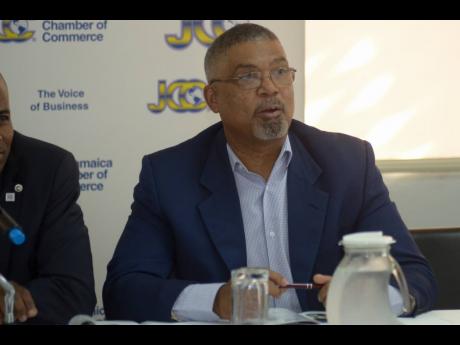 Business lobby group Jamaica Chamber of Commerce, JCC, is urging the government to follow through on a desire expressed by Minister of Finance Nigel Clarke to engage stakeholders in discussions about the bases, merits and experience of urban...

Business lobby group Jamaica Chamber of Commerce, JCC, is urging the government to follow through on a desire expressed by Minister of Finance Nigel Clarke to engage stakeholders in discussions about the bases, merits and experience of urban renewal tax incentives designed to drive economic and social development in blighted urban centres.

The initiative still exists for downtown Kingston, where it has another four years to run, but has, over the years, been discontinued for Spanish Town and Montego Bay.

There have been negative reactions to the most recent discontinuation of the tax write-off regime for Spanish Town since March 2018, and growing unease about whether the arrangement for Kingston will also be scrapped, eventually.

Following a Financial Gleaner story, which captured what Finance Minister Nigel Clarke later said represented off-the-cuff comments by him on the subject, the JCC issued a statement welcoming the minister’s openness to dialogue and urged that the talks take place as a matter of urgency.

Michael McMorris, a vice-president of the chamber, told the Financial Gleaner in an interview last week that the JCC has been seeking for some time to assess the outcomes of the programme, examine any weaknesses in the current arrangement, and make suggestions for improving the incentive regime.

Slow take-up of the facility has been highlighted by the government, with the finance minister signalling at the tabling of the 2021/22 national budget that the tax incentive programme will come up for legislative review. Some of the incentives have been made irrelevant by recent pro-business government policies, it has also been argued.

McMorris is pointing to slow, bureaucratic application process as a major turn-off to prospective investors seeking to benefit from the programme, for which the finance ministry has overall responsibility.

“The feedback that we get is that it is very onerous. You find that companies, even when they are contemplating the investment, have no way of knowing for sure whether they will achieve the incentive, but they have to create the building plans, the investment itself and then hope they get approval. That can be tricky. It is not a straightforward process. It takes a long time,” McMorris said.

“If you are forecasting the project with the idea that the urban renewal would provide you with a certain amount of fiscal space, then you want some more certainty where that is concerned. The simpler the better, and the easier it is to police. I don’t think a great job has been done in that regard,” the JCC representative added.

He is of the view that there is room for improvement of the legislation that was first passed for Kingston in 1995, and for Spanish Town in 2008.

He is sanguine that the finance minister will be receptive to the views of the chamber.

“Perhaps he has some ideas about what things could be done differently, so we look forward to the dialogue. We have a good relationship with the minister, and we think he will respond in due course,” said McMorris, adding that the JCC is open to the possibility that there is more context to the minister’s comments that the programme has not been successful and that it must be weighed against the imperative of ensuring strong, stable macroeconomic fundamentals.

“Urban renewal doesn’t work without inducements. Obviously, the macroeconomy is very important – if we, all of a sudden, found ourselves in the position of Dubai, then clearly you wouldn’t need any inducements. But usually, [the need for] urban renewal is in an area where you have some problems to overcome,” the JCC vice-president countered.

“The inducement of the incentive is meant to encourage persons to look beyond that malaise. The manner in which the urban centres are maintained, the responsiveness of the city in upkeep and basic municipal services, and, of course, safety and security have always been an issue,” he said.

Noting that the problems have been many and long-standing, McMorris said downtown Kingston, Spanish Town and Montego Bay, among other major town centres, needed a concentration of businesses to ensure working and living communities.

“The thinking is that the way a city is structured is very important to productivity. If you can walk to work and have medical services, supermarkets and all of these things in the same vicinity, it is a much more efficient way of working, producing and living. Cities are important as hubs for transportation, and so on. We have to keep our focus on vibrant urban centres, not just on spreading out.”

Having engaged with the UDC committee that manages the programme, the Planning Institute of Jamaica, among others in the government in the past, the JCC vice-president is optimistic that talks with the finance ministry will be able to iron out the kinks in the tax incentive facility.

In its statement, the JCC said it wants a commitment to maintaining basic infrastructure, streamlining decision-making around development and greater attention to ensuring public order and personal safety.