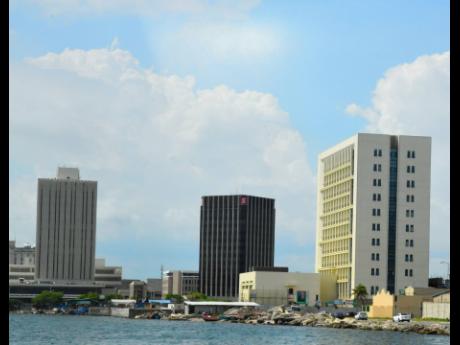 File
This image of the Kingston waterfront shows Bank of Jamaica at left and the headquarters of Scotiabank Jamaica at centre.

The last three months of 2020 saw growth in loans available to micro and small businesses, even as credit conditions tightened for larger firms.

As bad debt ballooned to more than $29 billion, with another $62 billion the subject of payment holidays as the economy contracted more than 10 per cent in the three months, lending institutions also clamped down on the issuing of unsecured loans and curtailed lending to big businesses, according to a Bank of Jamaica (BOJ) review of credit conditions for the December quarter.

The loans for which payments were suspended during the year included $51.6 billion worth of business loans, according to the BOJ statistics. With the passage of the new microcredit bill in January, making BOJ the sector regulator, the central bank is expected to begin supervision of the firms by January of 2022.

Micro enterprises are generally classified as entities employing less than five persons and whose annual turnover is less than or equal to $15 million; those with turnover above $15 million but below $75 million, and six to 20 staff, are categorised as small businesses; while medium enterprises generate turnover above $75 million but below $425 million and employ 21 to 50 workers; while large corporations earn more than $425 million in sales and have more than 50 employees on their payroll.

Credit made available to micro and small firms for the quarter eased relative to the previous quarter, particularly for local currency loans in agriculture and fishing; manufacturing, distribution, professional and other services; tourism; transport storage and communication; as well as for electricity and water industries.

Some lenders indicated that they had partnered with government agencies to channel more loan money to these businesses as part of a move to support opportunities for generating new revenue.

The availability of credit for the sectors was helped in large measure by unprecedented central bank liquidity support for the financial system, which was measured at some 12 per cent of GDP. The average current account balance maintained at the BOJ by deposit-taking institutions and primary dealers for the December quarter was $67.2 billion, up from $48.7 billion for the previous three months, and well in excess of the $57.3 billion the central bank deems adequate for the banking system.

But even as the system was awash with funds earmarked for micro and small business lending, the appetite for bank debt shrank among those businesses, amid the ongoing COVID-19 pandemic

In fact, that stance was mirrored across all size categories, with large enterprises opting for the capital markets to raise funds or relying on earnings instead.

There was a decline in local and foreign currency credit demand by businesses for the December 2020 quarter relative to the September 2020 quarter across a range of sectors, including mining and quarrying; manufacturing; construction; transport, storage and communications; electricity and water; with the decline in tourism having been particularly remarkable.

An aberration was the increase in the demand for foreign currency loans by distribution firms, which was said to reflect a need for working capital support.

Falling cost of credit in the economy generally, pulled down by lower central bank policy rates, was also passed on to all businesses, even though the micro sector generally faced higher average rates than small, medium and large businesses.

Some banks and near banks teamed up with public lending entities such as the EXIM Bank and wholesaler Development Bank of Jamaica to lower rates for businesses.

New Jamaican dollar loans for the micro sector were three points cheaper at 17.7 per cent interest over the quarter, down from a high of 21.76 per cent in the previous three months to September.

On average, business loan rates dropped by more than a point, from 12.28 per cent in the September quarter to 11.01 per cent in December.

Credit availability for individuals remained unchanged even as demand went up for all categories of personal lending – mortgages, credit card, other unsecured loans and motor vehicle, with some of the demand said to have reflected increased borrowing for refinancing and debt consolidation.

The stock of personal loans stood at $528 billion at the end of December, with consumer loans accounting for 51 per cent of bad debts.