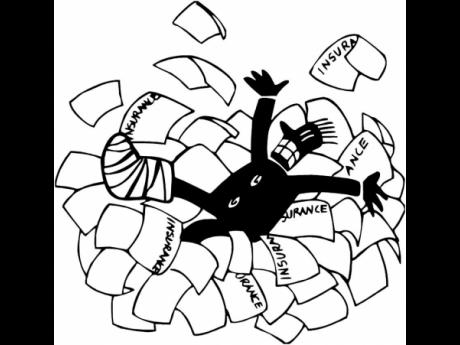 The Jamaica Observer’s May 2 headline, ‘Cyclist suffers double misfortune after defendant in accident claim dies’, was wrong. ‘Ex-shoemaker cyclist screwed’ would have been my headline.

I cannot think of a more appropriate word than that verb. Even though it is regarded as slang, it accurately reflects the way that I feel. The online Cambridge Dictionary sanctions its use. One meaning of ‘screwed’, in the present tense, is “to cheat or deceive someone”.

I concluded after reading the article four times that the editors made another mistake. The deaths of the driver and vehicle owner were unimportant. The continued suffering of the cyclist and the dysfunction in the motor vehicle insurance compensation system were the main takeaways.

These things occurred even though the bus that caused the accident was insured, the cyclist retained the services of a lawyer, and the insurer’s claims department was headed by a lawyer with an impressive title. The outcome after a two decade-plus wait by the victim: he got not even ‘one bills’ ($100). This is unfair.

Former member of parliament, attorney, columnist, and man of the cloth Ronnie Thwaites captured the state of the local transportation sector in a five-word headline in his May 3 commentary in this newspaper: ‘A betta mi buy it’.

Among the things he wrote about was “The culpably passive motor insurance industry”. Surprisingly, there was no reference to members of the legal profession. They often play important parts in the compensation system supply chain. “Self-interest rules at every juncture,” Mr Thwaites also argued. These things will become evident as the cyclist’s experiences with the compensation system are discussed below.

• The accident occurred on September 7, 2010. The cyclist received injuries to his back and knees. He can now barely walk and has been unable to work.

• The bus that caused the accident was insured.

• The cyclist retained a lawyer in October/November 2010.

• The lawyer reported the accident to the insurer in 2013.

• The bus owner failed to report the accident to the insurer.

• In 2013, the insurer obtained a copy of the police report, which confirmed the occurrence of the accident. This was because of information that the insurer received from the cyclist’s lawyer.

• The lawyer filed suit against the bus owner and the driver in August 2016, one month before the claim was statute-barred.

• There appears to be no evidence to suggest that the insurance contract between the bus owner and the insurer was not in force at the time of the accident or that the insurer had declined liability.

• A representative of the insurer informed the Observer that both the insured and the bus driver were dead.

• In September 2019, the cyclist’s lawyer informed her client that “we are unable to pursue a claim because the defendant is deceased, and we have no other person to pursue your claim against”.

• The insurer’s vice-president claims, general counsel, and company secretary wrote to the Observer in response to its request for an ex gratia payment to be made to the cyclist that “there are several issues in addition to the key issue of the matter being statute barred, which prevents any such decision being possible”.

The Motor Vehicles Insurance (Third-Party Risks) Act (MVITPRA) gives accident victims, like the cyclist, or their attorneys, the right to pursue their claims against vehicle owners and drivers.

Section 11(1) makes this clear: “The rights of any person in respect of any liability incurred by an insured shall, in the event of the death of the insured, and notwithstanding this enactment or any other law to the contrary, be preserved to be enforceable by such person against the personal representatives of the insured in the same manner and to the same extent as such rights would have been enforceable against the insured if he had survived.”

All local motor policies contain a similar statement. The death of the bus owner or bus driver is irrelevant to the issue of compensation of the cyclist.

Motor insurers often make a big deal about what this insurer called its ‘reporting requirements’ for accidents. This is a red herring. As I have written many times before, Section 8 of the MVITPRA was designed to prevent insurers from refusing to pay claims because policyholders or drivers failed to report accidents or reported them ‘late’.

This is what the act says: “Any condition in a policy or security issued or given for the purposes of this Act, providing that no liability shall arise under the policy or-security, or that any liability so arising shall cease, in the event of some specified thing being done or omitted to be done after the happening of the event giving rise to a claim under the policy or security shall be of no effect in connection with such claims.”

Sections 8 and 11, when coupled with the insurer’s absolute right to negotiate and settle claims under motor insurance policies, suggest that the insurer could have proactively started to negotiate the settlement of the cyclist’s claim in 2013. It did not. Instead, it played a waiting game.

The insurer bet, correctly, that it could place the onus on the cyclist’s lawyer to manage the settlement process. The insurer won the game. It paid zilch even though the bus driver caused the accident. The cyclist, who is still suffering from his injuries, and who can barely walk, ended up with nothing.

If this case is not an example of a compensation system that is broken, I do not know what is. This is another symptom of what the former MP called the patty-pan culture of the 1980s in his article.