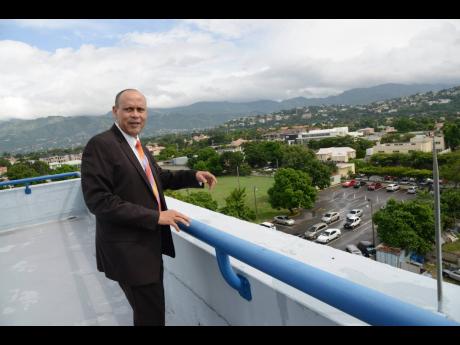 File
In this November 13, 2017 file photo, President of Guardian Life Limited Eric Hosin speaks about the company’s plans from the rooftop of the company’s New Kingston headquarters.

Having made a significant foray into property development with three residential high-rises in Kingston in the past four years, Guardian Life Limited, GLL, has bought up more real estate for future projects. President of the GLL, Eric Hosin, has...

Having made a significant foray into property development with three residential high-rises in Kingston in the past four years, Guardian Life Limited, GLL, has bought up more real estate for future projects.

President of the GLL, Eric Hosin, has confirmed that an item – purchase of investment property for $429 million – reflected in the No 2 life insurer’s 2020 financials, is related to the acquisition last year of property around its Trafalgar Road and Musgrave Avenue headquarters in New Kingston, where it already has significant landholdings and is in the process of constructing a second condominium complex, dubbed Cambridge.

“We are not ready to disclose our plans for that property,” Hosin said of the land acquisition in written responses to Financial Gleaner queries.

The GLL president would also not disclose the company’s projections for total income or asset contributions from its residential developments, including the Cambridge at Musgrave Avenue, which is still under construction, since April 2019; the Hampshire, completed in 2019 just across the road; and Camden, being built at Millsborough Avenue in upper St Andrew since January 2020.

Some $1 billion in deposits from sales of units in Camden and Cambridge are reflected in the company’s financials at year ending December 2020 and the value of property for development rose from $1.6 billion to $3.4 billion.

When the company launched out on its property development drive to diversify investment away from commercial paper, the 66-unit Hampshire was its phase one build, with the 176-unit Cambridge with two towers of ten floors each over three acres slated for phase two at a combined cost of $10 billion.

Hosin said in a November 2017 interview that other construction phases down the line would see more residential and commercial buildings going up on another six acres in the same vicinity. The Cambridge and Camden projects are slated for completion at the end of next year.

“Real estate development has been used to augment earnings from our core insurance business as an alternate source of earnings and for asset diversification,” he reiterated in his comments this week.

Meanwhile, Guardian is reporting that over 50 per cent of the units in its still-unfinished complexes have been sold, a situation that starkly contrasts with the rush on its first development, the Hampshire, when all units were reportedly sold out within weeks of breaking ground on construction. But Hosin says the slowed paced is deliberate.

“We took a calculated decision at the start of the projects to delay the sale of some of the units until closer to the completion of the project,” he said, without elaborating on the reason for the delay strategy.

Hosin is now guarded on future property developments, saying there are no current plans for new projects at this time.

“We are currently developing properties that have been in our land bank for several years. We will continue to acquire properties when opportunities arise and develop them when it can generate satisfactory returns for the benefit of our stakeholders,” he said.

The Guardian Life president is reporting that the company, which made a net profit of $9.3 billion last year, up from $7.9 billion the year before, and grew assets to $79.8 billion from $54.8 billion, is weathering the general economic downturn created by the pandemic with no significant impact seen on any areas of the business.

“We have not had to close down our property development sites, although it has slowed the pace of the construction works,” he said of the property constructions.

As for the company’s core business, insurance, Hosin noted that: “While the bearish stock market in 2020 negatively impacted our equities portfolio and, by extension, the net income from investment activities when compared with 2019, the pandemic has not negatively impacted premium growth.”

Premiums grew 12.5 per cent in the pandemic year, a better pace than the nine per cent growth seen in 2019, and Hosin’s outlook on 2021 remains rosy amid the health crisis.

“In fact, this is what insurance is all about; it provides for unexpected events, such as a pandemic. We have actually seen growth in our business as people are coming to realise the importance of insurance,” said the GLL president.

“As the vaccination programme gains momentum, we expect the economy to begin recovery and employment to increase, and with it the demand for our protection and savings products,” he said.

In 2020, Guardian Life acquired the insurance and annuities portfolio of sister company NCB Insurance. To facilitate the transaction, GLL increased its share capital to over 547.68 million ordinary shares in September, some 421.16 million of which were issued to Trinidadian parent Guardian Insurance Limited in exchange for $13.4 billion of cash.

The acquisition served to consolidate the Jamaican life insurance operations of ultimate parent NCB Financial Group under one local entity. Some $4.9 billion of the cash was used to fund the purchase of the insurance and annuities portfolios of NCB Insurance Company, which was stated on the Guardian Life’s books as valuing $35 billion.

Hosin said the majority of the fresh cash has been invested. The company poured $10.2 billion into financial assets last year, compared to $4.8 billion in 2019, and grew its cash position to $9.2 billion from $5 billion.