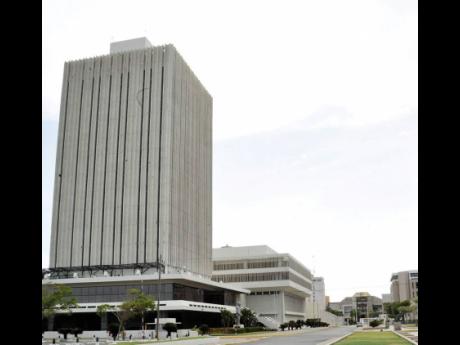 File The Bank of Jamaica building on the Kingston waterfront.

Microlenders now have 14 months to put their affairs in order and register their businesses with the Bank of Jamaica (BOJ) under the Microcredit Act, which was passed in January. At least one entity representing the sector that is said to have $20...

Microlenders now have 14 months to put their affairs in order and register their businesses with the Bank of Jamaica (BOJ) under the Microcredit Act, which was passed in January.

At least one entity representing the sector that is said to have $20 billion of loans in circulation has been appeased by the extended deadline to July 2022.

But management consultant Dr Blossom O’Meally-Nelson is raising the spectre of some money lenders going deeper underground to avoid detection in a sprawling market with a large but still unverified number of players, but which the Government estimates at around 200.

The new timeline for registration of microcredit institutions (MCIs), she said, addresses one of the major remaining concerns harboured up to last week by the 15 members of the Jamaica Association for Micro-Financing, known as JAMFIN, which she heads.

At a May 13 webinar hosted by JAMFIN, its members were brought up to speed on matters related to the Microcredit Act and the requirements for registration by the BOJ, their new regulator. The state minister for industry, investments, and commerce, Dr Norman Dunn, announced at the event that the new law would take effect in July 2021, although he gave no firm date, and efforts to ascertain from Finance Minister Nigel Clarke the precise day were unsuccessful.

The law provides microlenders with a 12-month reprieve, counting from the effective date, to be registered and to conform with the statute.

O’Meally-Nelson says that JAMFIN, which is said to represent some of the larger microlending entities in a market that up to now was unregulated, is still in the process of totting up the additional costs of business, which industry regulation by the Government will create.

“It is going to be a more costly and complex operation. We will have more working groups to look at how much money it is going to take to bring the MCIs to a level of compliance,” O’Meally-Nelson said in an interview with the Financial Gleaner.

“While it will depend on size, they will all have to invest in technology, put in place proper governance arrangements, staffing, and pay taxes at the level of regulated corporations, etc,” she said.

The regular corporate income tax rate is 25 per cent, but regulated entities pay a rate of 33.33 per cent. Additionally, some MCIs are believed to be outside the income tax net, but once they register with BOJ, that will change.

These and other factors, O’Meally-Nelson believes, may drive some microlenders, now existing as “one-man operations”, away from the glare of public attention, further underground. She noted that while MCIs operating in Kingston are more visible, many are doing business in rural Jamaica without ever coming to public attention.

The JAMFIN chairman is convinced that regulation of the sector will lead to mergers and acquisitions as the smaller businesses, in particular, confront the reality of significantly higher costs of doing business.

“It will not be worth the while if the portfolio is not big enough. The bigger companies are actually right now hunting for the portfolios to buy them. We have had enquiries, but when we put it to our members, we don’t get a positive response of people wanting to take up those offers,” she said.

She is of the view, however, that this stance will soften as the reality of significantly increased costs, the expenses associated with conforming to the new law, and the financial effects of the COVID-19 pandemic become clearer to microfinance firms.

“Right now, they are caught up with trying to survive COVID. Many don’t know if they will have a business after the pandemic. This is just a bad time. The portfolios are taking a big hit,” O’Meally-Nelson said.

JAMFIN’s Caribbean Institute of Micro-Financing is said to be conducting training to assist MCIs get up to speed with conforming to the new law. The association also has plans to huddle with the other sector umbrella group, Jamaica Micro Financing Association Limited, known as JamFA, to develop a proposal to seek government-facilitated grants and loan funding available for micro, small, and medium enterprises.

Finance Minister Clarke is also pointing to bank loans and international grant and loan funding as other sources of funding for working capital, which will be opened up to registered MCIs. In a recent interview with the Financial Gleaner, Clarke pointed out that loans had been cut off by banks wary of doing business with unregulated entities out of fear of running afoul of national and global anti-money laundering and anti-terrorism financing laws. Only large MCIs, which were part of other regulatory frameworks, he added, have been able to access international funding.

“Because they were unregulated and, therefore, open and susceptible to the risk of criminal proceeds being laundered through these institutions, there are commercial banks in Jamaica who took the stance that they would not bank them. A number of players in the microcredit space were anxious to get the law passed because it would signal to local commercial banks and the international community that they are above board and fit and proper,” Clarke said.