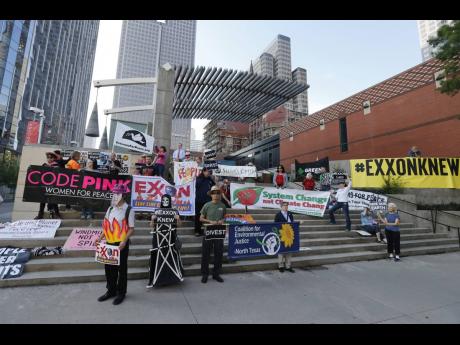 AP
In this May 31, 2017 photo, climate change protesters gather outside of the Exxon shareholders meeting in Dallas, Texas.

It is not often that well-resourced and politically powerful companies such as ExxonMobil and Shell suffer historic defeats.

However, last month, in different ways, both oil majors saw activist shareholders and environmentalists cause them and the international energy sector to have to think hard about what the future holds for hydrocarbons.

On May 26, a small hedge fund, Engine No. 1, which held a 0.02 per cent shareholding in Exxon worth about US$50 million, led a powerful dissident shareholder group to propose the election to the main board of the oil giant, four alternative nominees.

Two, with proven track records in creating significant earnings for energy companies and strong environmental credentials, were elected immediately, and a third was confirmed to the board a short while later.

At issue was whether Exxon, a massive global corporation valued at about US$250 billion, could, by adjusting its business strategy, respond to rapidly changing global thinking about combating climate change, and in doing so, improve its financial performance. In contrast to many other oil majors, Exxon has chosen, up to now, industry analysts say, to spend its resources on boosting output, based on a belief that oil and gas demand would continue to grow.

What was telling in Exxon’s case was that Engine No. 1 was able to obtain the support of major asset managers, including BlackRock, reportedly Exxon’s second-largest shareholder, on the basis that the three new directors would bring “fresh perspectives and relevant transformative energy experience” in the coming energy transition.

Coincidentally, a second significant setback for the global energy sector came on the same day in a ruling in the Dutch courts in relation to Royal Dutch Shell. There, a court ordered that it must deepen its planned greenhouse gas emission cuts, ordering Shell Group “and the suppliers and customers of the group” to reduce by 45 per cent by 2030 its carbon emissions from 2019 levels.

In a case brought by Milieudefensie on behalf of more than 17,000 Dutch citizens and six other environmental groups including Greenpeace and Friends of the Earth Netherlands, Shell had argued that it had already set targets consistent with limiting global warming to the more ambitious target of 1.5˚Celsius contained in the Paris Climate Agreement. But since the ruling, the company’s Chief Executive, Ben van Beurden, has said that despite disputing the judgement, Shell will rise to the challenge, and “in a way that remains purposeful and profitable”, seek to accelerate further its emissions strategy.

The two separate but related events coincide with renewed United States and Chinese interest in achieving global agreement at COP26 in Scotland in November on the delivery of measures that ensure adaptation and resilience in response to climate change; and growing climate related environmental activism, legal challenges, and consumer- led pressure.

This is all happening just as the economic and geopolitical map of the of the Caribbean is being redrawn by the finds made by ExxonMobil and others off Guyana and Suriname, and the possibility of new prospects off the coasts of Barbados, Grenada, Trinidad, and the Dominican Republic.

This potentially places more nations in the Caribbean in the apparently paradoxical position of becoming major energy producers in a region that is tourism dominated, deeply concerned about global warming and sea level change and the dangers posed by carbon emissions.

Much of the recent environmental focus in and on the region has been on the extraction of undersea oil and related issues such as licensing, spillage, gas flaring, and the impact on marine life and biodiversity, but this is likely to change.

Consumer activism, both domestic and international, are becoming commonplace, and in the years ahead, may rapidly move to onshore projects that the newfound oil wealth will bring.

In an indication of where in Guyana’s case oil extraction may take it, President Ali and his ministers have recently outlined some of the land-based projects under active discussion.

These include an energy corridor linking Brazil’s northern states of Roraima and Amapá, with Guyana, Suriname, and French Guiana to share electricity, a project, for which the Inter-American Development Bank produced in 2016 an Arco Norte Electrical Interconnection baseline study that proposes the generation and exchange of renewable energy between the four nations.

Other plans involve a significant expansion in Guyanese agriculture to ‘feed the region’; a deep-water port to facilitate shipping and act as a logistics hub for the Americas; the full development of the road linking Georgetown to Brazil’s land-locked northeast; and new infrastructure developments enabling the development of other industries in an environmentally sensitive region.

All such projects in the Guianas are, of course challenging, but if professionally managed in their development, execution, and operation, they could see Guyana and Suriname becoming sustainable development models for the Americas and an example of what might be achieved in the dying decades of big oil.

For this to happen, it will require not just transparent and publicly accountable decision making, licensing processes ,and regular environmental audits, but a more proactive approach to the questioning that will come from civil society, globally connected environmental lobbies, and investor and consumer activists in the United States and Europe.

In an indication of this, the World Wildlife Fund Guianas recently called for a full environmental and social assessment of the oil and gas sector in Guyana and Suriname in order to give decision-makers and the public an objective view of what is happening.

The WWF argued that this will not just benefit stakeholders’ understanding of the issues but co-create with Governments and the companies concerned long-lasting and sustainable solutions that are less costly and conflicting.

Unfortunately, much of what has been written in the region and beyond about the potential for new-found hydrocarbon and mineral wealth obscures a more important but largely lacking intra-Caribbean debate about where further finds lead and what the environmental, economic, and geopolitical implications might be.

After years of exploitation, Guyana and Suriname deserve the development they are about to experience. However, this should not be at the cost of becoming carbon emissions exporters, the environment, or the region’s desire for a low-carbon, sustainable future.