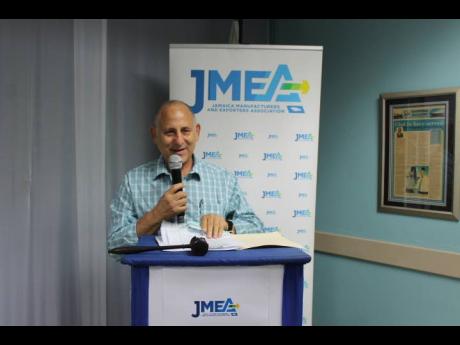 Newly elected president of the Jamaica Manufacturers and Exporters Association John Mahfood has set himself a goal of increasing the quantity of goods that manufacturers – particularly those producing on a smaller scale – sell to Caribbean markets...

Newly elected president of the Jamaica Manufacturers and Exporters Association John Mahfood has set himself a goal of increasing the quantity of goods that manufacturers – particularly those producing on a smaller scale – sell to Caribbean markets.

Additionally, the new president is looking at ways in which to improve the sale of locally manufactured goods online, he told the Financial Gleaner in a post-election interview.

Mahfood, who was elected at JMEA’s annual general meeting on Wednesday for a one-year term, will be striving for a more collaborative approach to business in which large- scale exporters assist smaller players with cargo space and is aiming for Jamaican manufacturers to develop a larger customer base throughout the region. It includes discussions with Postal Corporation of Jamaica, on which many small and micro entrepreneurs rely, to speed up delivery times for exporters.

The two initiatives go hand in hand and is meant to give fillip to Jamaica’s flat export markets, which contracted by 0.1 per cent in the first quarter ending March to US$354.6 million and lags imports of US$1.3 billion. Exports to Caricom in the March quarter amounted to US$20.6 million, while imports from the region more than tripled that, leading to a trade gap with the bloc of US$51 million.

“JMEA has an agenda of items that are intended to improve export capability, remove bureaucracy, and so on, but I believe that there are some opportunities to do things a little differently,” Mahfood said – the idea being that local businesses need help to penetrate and consistently service markets within areas such as the United States, while the right online sales platform could allow easier reach into even some of the more difficult trading arenas.

Some big companies with large distribution footprints already allow smaller companies to share their containers to ship goods to overseas markets. But the new JMEA president, who wants to see a more sustained effort, said his first order of business will be to engage large manufacturers like Seprod and GraceKennedy on the issue.

Mahfood, who himself is the CEO of a medium-sized manufacturing company with an export market, Jamaican Teas Limited, already does the same for smaller manufacturers to help get their goods to customers overseas.

“With the help of some of the more established manufacturers, who already have customers and have a network they can assist by introducing the smaller manufacturers to their own customers and put their goods in their containers,” Mahfood said.

“My own company sells throughout the Caribbean, so if I have customers in Barbados, for example, I can certainly introduce smaller players to them. They can make presentations to them, and if they are able to generate sales, I can put their goods in our containers.”

The initiative, he said, would be particularly helpful for manufacturers who are shipping sample goods to prospective customers or buyers.

As for the JMEA’s e-commerce agenda, the business lobby group plans to work with Jamaican Government’s marketing agency, Jampro, on how to improve the process of selling goods online. It Is also to be part of the discussions to be held with the Postal Corporation.

“We haven’t gotten over the shipping challenge, and that’s the biggest hurdle. We are hoping that the Post Office will work with us on it, but if that doesn’t work, then we will have to look at how we can warehouse the product in the United States and get some kind of fulfilment centre,” Mahfood said.

“If exporters go through traditional shipping companies, it’s going to cost a lot to ship goods from Jamaica. If you go to the post office, the cost will be down, but the length of time is long. So it’s a question of how can we get the best out of those two organisations or if the Post Office themselves can find a way to speed up the delivery process,” he said.

Mahfood succeeds Richard Pandohie who served as president of the JMEA for two consecutive terms. Jerome Miles, the general manager of Rainforest Seafoods Limited, was also elected as deputy president at the annual meeting.