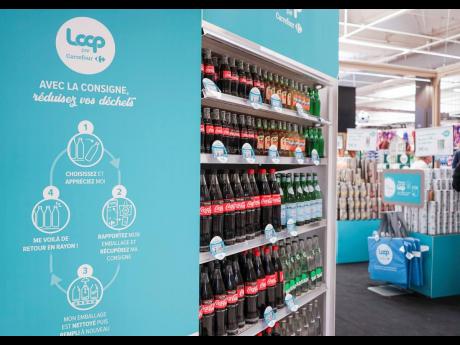 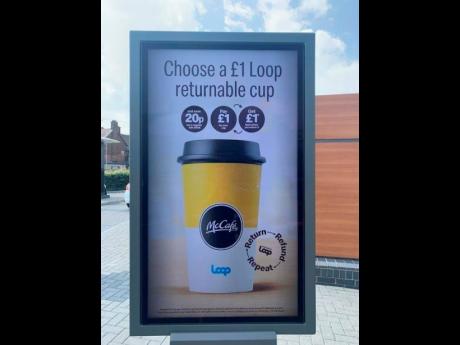 An ad for a reusable cup at McDonald’s restaurant.
1
2

Reusable packaging, from stainless steel ice cream containers to glass jars of soap, is about to become more common at groceries and restaurants worldwide.

Loop, a two-year-old company that collects and sanitises reusable containers, has said it’s expanding after successful trials at groceries in France and Japan. Kroger and Walgreens in the United States, Tesco in the United Kingdom, and Woolworths in Australia are among the chains partnering with Loop to sell household staples in reusable packages. McDonald’s, Burger King and Tim Hortons have also signed on.

In all, Loop says, 191 stores and restaurants worldwide will be selling products in reusable packages by the first quarter of 2022, up from just a dozen stores in Paris at the end of 2020.

Grocery stores will have a special Loop area, where manufacturers – from independent brands to big players like Nestlé – have packaged pantry items, household cleaners and other products in reusable containers. More than 150 manufacturers will be participating worldwide by early next year, selling 375 products.

Customers pay a deposit, ranging from US15 cents for a bottle of Coca-Cola to US$10 for a stainless steel container of Clorox wipes, in addition to the price of their item. When customers are finished with the container, they can return it to the store and get their deposit refunded through Loop’s app. Loop collects the containers, cleans them and returns them to manufacturers to be refilled.

Fast-food outlets – including a handful of Burger Kings in New York, Tim Hortons in Toronto and McDonald’s in the UK – will also distribute and collect reusable coffee cups and sandwich holders made from sturdy plastic.

Reusable packaging is well developed in other industries, like automotive, said Cimberly Weir, an outreach coordinator and instructor at Michigan State University’s School of Packaging. But to her knowledge, Loop is the first to try this with consumer products.

“We are the ones who are responsible for actually getting that product returned,” she said. “So it’s putting a lot more pressure on everyday citizens to do their part.”

While Loop’s approach is unique, it’s one of many ongoing efforts to eliminate packaging waste. Lego said last year it would remove plastic packaging from its play sets. Coca-Cola, PepsiCo and Keurig Dr Pepper have invested millions to improve the recycling and processing of their plastic bottles. Amazon encourages customers to get their items shipped in fewer boxes; the company says it has eliminated one million tons of packaging since 2015.

Loop, a division of New Jersey-based recycling company TerraCycle, is actually an old idea, says TerraCycle founder and CEO Tom Szaky. Before the 1950s, products were made to last, but they’ve gotten thinner and cheaper in the decades since, he said.

“We’re hitting the apex of that now, and people are fed up with that trend,” Szaky said. “There’s a huge attraction to the idea of higher quality and materials.”

That’s true for Chris Critchett, 66, who was browsing the Loop aisle in a Tesco store in Milton Keynes, England, earlier this week.

“I think lemonade bottles used to be like that when I was younger, so I think it’s quite a good idea,” Critchett said. “It’s just trying to get people to actually do it, so they work it into their shopping system.”

Szaky said the company sees around 80 per cent of the packaging returned within 60 days of purchase. In some cases, he said, consumers may just be keeping the packaging and reusing it themselves.

Szaky said every country in which Loop operates has a dedicated cleaning facility, as well as smaller facilities where packaging can be stored before cleaning. He recognises that transporting all that material has an environmental impact, but he says reusing a container dozens of times is still less harmful than repeatedly extracting material from the earth to make new packaging.

Loop gets its funding from the fees it charges to its corporate partners. It’s not yet making a profit, Szaky said, but expects to within two years.

Keith Daley, chief impact officer at Kroger, the largest US grocer, said his company signed on with Loop to help meet a multi-year commitment to reduce waste. In October, Kroger will launch a six-month Loop pilot at 25 Fred Meyer stores in the Portland, Oregon area. Dedicated Loop aisles will display 20 separate items, including some of Kroger’s own products. Loop ambassadors will explain the programme to customers.

“We fundamentally believe that this is one of those potentially game-changing ideas,” Daley said.

Loop had hoped to be in 1,000 stores and restaurants by this time, but the pandemic slowed its progress. Still, Szaky said demand for Loop remained even as stores shut down other waste-saving measures, like communal bins for pantry staples.

Weir said a major turning point for the packaging industry came in 2006, when Walmart announced it would start grading suppliers on the sustainability of their packaging.

Interest in sustainability has only grown since then, Weir said. She sees it at Michigan State’s packaging school, the nation’s largest, where nearly all of the 600 students cite the environment as a reason they’re in the programme.

Matt Casale, the environment campaign director of the US Public Interest Research Group, PIRG, agrees that bringing reusable packaging into the mainstream is important. But he also wishes society would think more deeply about all the stuff that is made, packaged and shipped.

PIRG backs laws like one that recently passed in Maine, which charges manufacturers who create packaging a fee that is used to boost recycling. It also supports state bans on single-use plastic bags and polystyrene food containers, which have passed in Colorado and several other states.

“That’s going to be our 21st-century challenge rethinking the way we do everything, to make it make sense on a very small planet with a lot of people living on it,” Casale said.