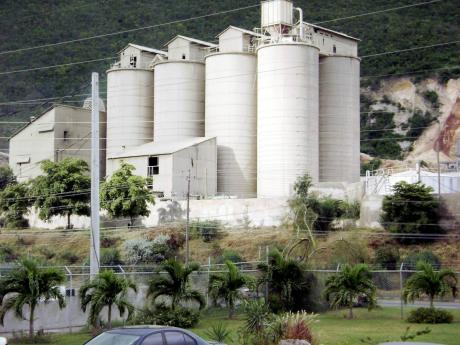 File
A section of the Caribbean Cement Company plant at Rockfort, Kingston, as seen in 2017.

Shareholders of Caribbean Cement Company Limited, CCCL, approved a resolution allowing ultimate parent company Cemex to receive royalties equivalent to four per cent of sales or about $800 million to $1 billion annually, despite some opposition from minority shareholders.

“This is concerning,” said Dan Theoc, senior vice-president of investment banking at brokerage house Mayberry Investments Limited, who enunciated the issues as “the timing, the short notice and soft costs used to justify the royalty”.

Mayberry holds the largest block of shares in Caribbean Cement outside of Cemex and its affiliates. Its 13.5 million shares, which gives it 1.59 per cent ownership in the Kingston-based cement maker, is held through subsidiary Mayberry Jamaican Equities Limited.

Cemex, a global construction firm based in Mexico, argued that for five years Caribbean Cement freely benefited from its intellectual property, IP and internal systems, suggesting the royalty payments would also be a form of payback.

Caribbean Cement operates the sole cement factory in Jamaica, and is controlled 79 per cent by Cemex, mainly through Trinidad Cement Limited.

Prior to the vote, the market was advised that Caribbean Cement had for five years benefited freely from the intellectual property, IP and internal systems of Cemex, which the royalty fee approved at the company’s annual general meeting on Tuesday would now cover.

The 4.0 royalty fee reflects analysis performed by an independent transfer pricing and business valuation firm in the United States, called Economic Partners LLC, according to disclosures made ahead of the annual general meeting. It’s expected to take effect in January.

“The largest minority shareholder is very concerned about this royalty fee,” Theoc reiterated, while noting that the four per cent charge was equivalent to 20 per cent of Caribbean Cement’s profits in 2020.

He also noted that Cemex gave no indication to investors over the years of the pending royalty, saying that knowledge would have resulted in Mayberry and others adjusting their valuation of the company. For instance, Theoc estimates the present value of the royalties over the next 10 years at $9 billion.

“This will also put pressure on Jamaica’s balance of payments, because it will be money leaving the island,” he said.

Although the annual meeting took place on Tuesday, Caribbean Cement closed registration for attendance last Friday, which surprised some shareholders who were unable to participate as a result.

Theoc, who was among the attendees, said the motion to consider the resolution was proposed by Caribbean Cement and seconded by a small investor.

Mayberry’s opposition to the fee was read into the record.

Theoc added that it is a difficult and unusual to see an $800 million cost proposal dropped on shareholders without any cost-benefit analysis shown to minority shareholders.

“It is material even for CCC,” he said. “We have to reassess our long-term view of the business. We like the business but when a shareholder can get up and do this, it makes you wonder what’s next.”

Other Cemex-owned businesses are already subjected to the royalty fee, including those in Colombia, Philippines, Trinidad.

To that, Mayberry responded that Caribbean Cement operates under a special regime, which doesn’t necessarily occur in other jurisdictions. Jamaica’s cement market offers protection to Caribbean Cement, ostensibly to ensure the Kingston plant’s continued viability, under a regime where import rivals are allowed only a small quota of the market.