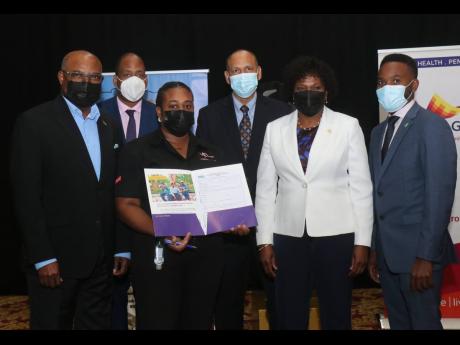 The inspiration for today’s piece was three headlines on page three of last Thursday’s Gleaner. ‘Contented cows give most milk’ and ‘Sweatshop surgery’ were juxtaposed with ‘Pension plan a life changer for tourism workers’.

The latter was about the Tourism Workers Pension Scheme (TWPS), the subject of today’s piece. All three spoke to workplace issues. The one with the bovine allusion provoked two questions: Was the claim, attributed to a reverend gentleman, true? Also, was it based on science or just an old-time saying?

I found the answers to both questions in minutes. A 2017 study, according to Food & Wine, has shown that cattle that have lived a happier life produce more nutritious milk. The study, published in the Journal of Endocrinology, said that researchers from the University of Wisconsin, Madison, found that cows exposed to a chemical known to boost happiness produced milk with an increased calcium level.

Researchers treated two breeds of bovine – Holstein and Jersey – with daily infusions of the chemical that converts into the happy hormone, serotonin. Across all the study specimens, the overall level of calcium in the cows rose. However, the two breeds were affected in different ways. While the Holstein cows had higher levels of calcium in their blood, and lower levels in their milk, the Jersey cows saw a spike in calcium in their milk specifically. There was no increase in yield. The pastor should, therefore, have said that contented cows produced more nutritious milk.

TWPS is an important workplace matter, according to Tourism Minister Edmund Bartlett. It is “more than just a game-changer”. He said that it will provide a safety net for permanent, contract, or self-employed workers. Redcap porters, raftsmen, craft merchants and artisans, taxi operators and bartenders, waitresses, room attendants, and self-employed suppliers to the tourism industry are among the groups eligible to join the scheme.

The plan, which has been in development for over a decade, arose out of a partnership between the public and private sectors.

There was no mention of group life insurance in the article. However, it is common for this type of coverage to be included with pension plans. Group life insurance is a type of insurance in which one contract is issued to cover groups of persons, for example, direct and indirect employees of the tourist industry and allied groups.

The contract is issued to the employer or plan sponsor who then offers coverage as a benefit to employees. Benefits are typically expressed as a multiple of the member’s annual earnings, for example, two times annual wages.

The premium for group life coverage is funded from the member’s pension contributions. By bundling life insurance with retirement benefits, members and their dependents get access to coverage that they may not have otherwise had at a fraction of real cost. Insurers also get a pool of new of income.

Pension plans and insurance schemes have similar structures. The contributions of the many are used to pay benefits to the few. The typical insurance diagram – life, health, house and motor – mirrors the make-up of a pension scheme, for example, the Penn State University’s course diagram aimed at insurance students (see https://training.global.psu.edu).

In the case of TWPS, substitute the word ‘members’ for students on the Penn State diagram. The former comprises permanent, contract, or self-employed workers. The occupational groups would include Redcap porters, raftsmen, craft merchants and artisans, taxi operators and bartenders, waitresses, room attendants, and self-employed suppliers. The earnings, ages and genders that make up each group would be different.

These persons will contribute a fixed portion of their income to a general fund. The fund would be invested and earn income. The income earned from the investments would not be subject to taxes. Pension benefits would be paid out of the pooled funds at a fixed retirement age set out in the rules.

The Penn State diagram does not reflect two other important sources of funding. The first is the government. It committed to pay $1 billion to kick-start the scheme. This is unusual. The second is employers who will provide contributions matching those of the employees.

Minister Bartlett projects that if the fund meets its target of 350,000 persons in the first year, the pool of funds available to pay pensions will amount to $100 billion. These are impressive figures. Data from the Financial Services Commission indicate that on June 30 last year, the membership of all pension plans amounted to 139,419 while the total asset value of those funds was $686.98 billion.

Will TWPS lead to a higher serotonin level in the blood of the average tourism worker across Jamaica in the next three to five years? Minister Bartlett appears convinced that this will happen. I am curious to find out.

Cedric E. Stephens provides independent information and advice about the management of risks and insurance. For free information or counsel, write to: aegis@flowja.com or business@gleanerjm.com