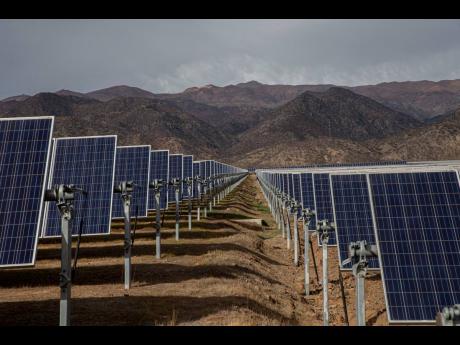 AP
Solar panels stand in the Quilapilún solar energy plant, a joint venture by Chile and China, in Colina, Chile on August 20, 2019.

Chile holds itself out as a global leader on climate change. Nearly 22 per cent of its electricity is generated by solar and wind farms, putting it far ahead of both the global average, 10 per cent, and the United States, at 13 per cent. It was one of the first countries to declare a target for renewable energy, in 2008.

Yet even as solar farms have spread across the north and centre of the long, narrow nation, imported natural gas, a polluting fossil fuel, has been able to sideline the clean electricity they provide thanks to a sweet deal won from the government.

Marcelo Mena, a former environment minister in Chile, witnessed that waste of clean power before he took the helm at the new Global Methane Hub, a non-profit aimed at reducing global methane emissions. Natural gas is basically methane.

“They’re actually hindering the power that we can deliver from renewable energy,” Mena said of his experience with natural gas in an interview with the Associated Press. “It’s been more of an opposition towards 100 per cent renewable target.”

Mena became disillusioned as he saw renewable energy pushed out by fossil fuels in the north of the country, where sunshine is most plentiful.

“At the same time, in the south of Chile, there is a big lack of natural gas for heating and people are heating themselves with wood and choking on it. It was such a big contradiction,” said Mena. “That’s my personal journey.”

Chile provides a view into the way fossil fuel companies can manage to stay on top, even under governments that try to pursue clean energy.

The shock that led to an energy transition in Chile came in the mid 2000s, when Argentina drastically reduced gas exports to Chile to focus on its domestic market. Chileans faced strict power rationing and regular blackouts.

After scrambling to come up with an alternative, the nation saw an opportunity.

Chile receives some of the strongest and most consistent sunshine on the planet, especially in the Atacama Desert, in the north. So it was natural for the country to seek investment in solar and wind projects through public auctions and quotas that required electricity companies to offer a minimum amount of renewable energy.

Investors heard their call. Developers built out hundreds of solar, wind and geothermal plants throughout the country, which stretches 4,300km (2,700 miles) from north to south.

But the devil was in the details. To provide power when the sun wasn’t shining, the government also invested heavily in fossil fuel infrastructure.

Natural gas importers and owners of gas-fired plants successfully argued that to secure long-term contracts for gas, they needed a guarantee that the Chilean power grid would take their gas-fired electricity even when other, greener generators were making plenty of power.

Chilean power generator Colbun, a large consumer of natural gas, said international contracts in which LNG importers must pay for gas whether they need it or not, along with a lack of storage, leave the sector vulnerable.

“It is important that the regulations recognise this condition so that the electricity market has enough natural gas to ensure the safety and competitiveness of the system,” the company said in an emailed response to the AP.

The government allowed them to declare electricity from LNG imports as “forced gas,” meaning gas-fired electricity was given priority on the power market, which otherwise favours renewables.

“Any situation in the electricity market that preferences fossil fuel, taking space away from renewables, is a loss for the environment and for the energy transition,” said Ana Lía Rojas, who leads the Chilean Association of Renewable Energies and Storage.

Another consequence of forcing gas-fired electricity into the market is that it lowered electricity prices for all providers, meaning they got paid less, said Alfredo Solar, a solar plant manager with over 20 years of experience.

“I have worked in solar plants that, for example, were in default because the market price was much lower than what was projected,” Solar said, stressing that providers of renewable energy operate without contracts and depend on those revenues.

Emissions from burning gas, oil and coal for electricity, transportation and other uses are the chief driver of climate change. Last year, researchers calculated that nearly 60 per cent of the world’s oil and gas reserves and 90 per cent of the coal reserves need to stay underground by 2050 in order to meet the goals of the Paris Climate Agreement.

Natural gas or methane is a powerful greenhouse gas that has an even stronger impact on the environment than carbon dioxide, in the short term. Methane traps heat 84 times more effectively than carbon dioxide over a 20-year period, making methane reduction one of the fastest routes to reducing global warming, experts said.

In November, during the UN climate summit in Glasgow, Scotland, the United States, the European Union and dozens of other nations pledged to reduce overall methane emissions worldwide by 30 per cent by 2030.

Last year, the Chilean government reduced the advantage given to natural gas power providers. Their power still enters the grid at a reduced price, but is not supposed to displace renewables. Yet the concept of “forced gas” still exists, and renewable advocates in Chile say the changes are not enough.

In other countries, battery storage is rapidly taking the place of new gas-fired power plants because they can provide electricity to the grid when the sun is down or the wind is not blowing. In the United States, this kind of stored electricity has increased 1200 per cent in five years. An amount equalling what three nuclear plants can provide was installed in 2021. That was double the year before.

But large-scale battery storage is still too expensive to be widely used in Chile, said Daniel Salazar, former executive director of Chile’s northern power grid, now with consultancy firm EnergiE. “Chile has several projects, but they are still high-cost solutions that do not compete with other options,” Salazar said.

Even Rojas, of the Chilean renewable energy association, supported the role of natural gas. “Natural gas is the fuel of the energy transition, the technology that will allow us to make those adjustments, as long as it never takes space away from renewables,” she said.

In many other countries, the idea of natural gas as the fuel that enables the energy transition is fading. That’s because the fuel is only more climate friendly than coal if it does not leak out and is not deliberately released from wells and infrastructure along its path to the power plant. But studies and satellite imagery show both things do happen.

By 2030, solar power should account for 30 per cent of total installed electricity capacity in Chile, according to the Association of Power Generators. That would make it the nation’s largest source of power.

Mena, the former environment minister, said the established energy companies used to tell him that phaseout of fossil fuels takes a long time. Five years ago, he said, people were telling him the price of solar could never plunge. But it did. “My take-home message is change comes from unreasonable people,” willing to go up against what is supposedly impossible, he said pointing to Chile’s large and growing clean energy sector. “We need unreasonable people making that change.”