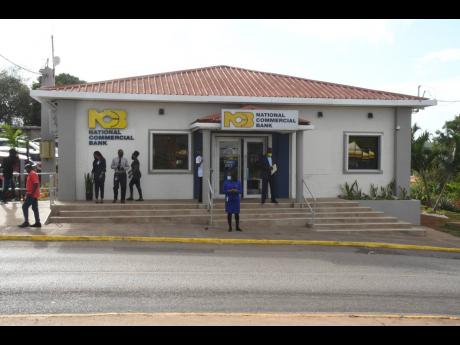 Persons stand outside a branch of National Commercial Bank on April 13, 2022, in Junction, St Elizabeth.

In a move described as a last resort by a senior officer at National Commercial Bank Jamaica, NCB, the market leading bank will be increasing interest rates for some customers who are in the process of repaying borrowed funds. The borrowers to be...

In a move described as a last resort by a senior officer at National Commercial Bank Jamaica, NCB, the market leading bank will be increasing interest rates for some customers who are in the process of repaying borrowed funds.

The borrowers to be impacted by the rate changes, which take effect on July 19, include SME customers, those businesses earning $600 million or less in annual revenues, and holders of secured and unsecured personal loans with the institution, such as mortgages, home equity loans, car loans and debt consolidation.

Loan rates will increase by an average of 1.14 per cent, NCB said, and will only affect customers who have variable rate loan contracts with the bank. Under a variable rate loan agreement, banks adjust interest rates in accordance with changes in the market.

NCB said its current action results from the central bank’s increases in interest rates, which moved the policy rate from 0.5 per cent to 5.0 per cent in six adjustments over the past eight months.

NCB also says nearly half the borrowed funds in its near $560 billion loan portfolio is priced at variable rates. The rest is largely made up of fixed rate contracts under which borrowers – primarily high-net-worth clients, corporate and commercial customers – pay a constant interest rate.

NCB is the fifth bank to announce an increase in variable-rate loans amid rising policy rates, the others being JN Bank Limited, Sagicor Bank Jamaica, First Global Bank and VM Group. But NCB’s rate changes so far appears to range higher than the others, with banks like VMBS and Sagicor Bank declaring that they are keeping the annual rate adjustment to a maximum 1.5 percentage points or 150 basis points.

NCB’s interest rate adjustment on existing loan accounts will range from increases of one basis point to 175 basis points.

“So if a customer is paying an interest of say 6.85 per cent on a car loan, the new rate will be 8.25 per cent, so that’s an adjustment of 1.4 percentage points,” the senior manager told the Financial Gleaner.

The bank is legally obliged to give affected customers a minimum of 45 days notice explaining the changes to the accounts and the new monthly loan repayment amounts.

The Bank of Jamaica is expected to continue raising interest rates as a tool to cool inflation. Consequently, with inflation still on the rise, the cost of borrowing is expected to stay elevated.

Inflation is projected to peak in the range of 12 per cent to 15 per cent, but is not expected to fall back within the central bank’s target range of 4-6 per cent until the June 2023 quarter.

Inflation was at 11.8 per cent in April. BOJ has signalled that another adjustment in interest rates could come at the next Monetary Policy Committee scheduled for June 29, saying it would depend on the incoming data.

“I don’t recall NCB taking actions like this in the longest time because the BOJ’s rates have been pretty stable, and so this is nothing else other than the fact that its costing more for us to maintain these loans,” the senior officer said regarding the bank’s lending rate increases.