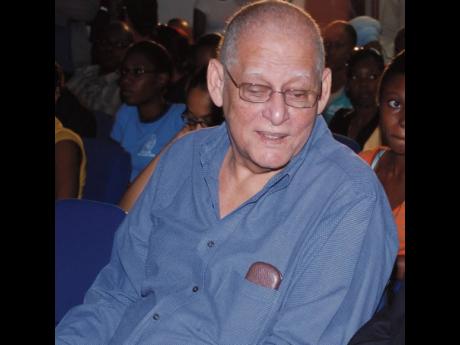 The contribution of former vice chancellor of the University of the West Indies, Sir Alister McIntyre, to Caribbean trade scholarship and policy development is being described as having been central to the region finding its own voice and home-grown approaches to forging successful trade and foreign relations policies.

The University Press has a law book of the speeches and technical papers by McIntyre titled Caribbean Trade Integration and Development, Volumes 1 & 2: Selected Papers and Speeches of Sir Alister McIntyre.

“We still peddle the myth that politicians make policy but continue to ignore the clear reality that there are the heads of institutions, advisers, technical experts and public servants who design the framework, set the parameters and identify the options which determine the outcomes of policy determination,” former prime minister P.J. Patterson said at the launch of the publication last week.

Patterson is a former chairman of Caricom’s prime ministerial subcommittee on external negotiations, and was involved in several global trade discussions alongside McIntyre. The former prime minister now heads the P.J. Patterson Centre for Africa-Caribbean Advocacy at The UWI. He noted that since the 1960s, McIntyre, who did early work in the area of decolonisation and development, made a meaningful difference to the lives of the Caribbean people by seeking to instil a sense of confidence in countries of the region to fashion their own global identity and international relations strategies.

Patterson said McIntyre accomplished this by encouraging Caribbean leaders to think out in clear and precise terms what sort of external relationships are compatible with their new constitutional statuses. He said the regional academic and civil servant urged the design of a distinct Caribbean external trade policy to avoid functional dependency on large economies and former colonial masters.

“In his distinguished, multifaceted career he has been the head of our principal regional institutions and has been a catalytic source of policy formulation for the Caribbean and beyond. There is no government within the Caribbean which has not been a beneficiary of his towering intellect and wealth of experience,” according to Patterson.

The statesman-in-residence at the UWI centre recalled McIntyre’s lead role in preparing trade policy brief for members of the African, Caribbean and Pacific group of nations when they engaged in negotiations for the first Lomé trade convention signed between 71 ACP countries and the nations of Europe in 1975. Patterson, who was Jamaica’s foreign trade minister for those talks, said the technical paper set out in clear and compelling terms the case on which the ACP relied throughout those negotiations, which he described as having been complex and groundbreaking.

The ACP is now known as ACPS – the African, Caribbean and Pacific States.

“In that comprehensive document we witness the mastery of economic science with that brilliance of mind and wide visionary span which are exquisitely combined to yield pragmatic and innovative solutions for a special relationship of African, Caribbean and Pacific nations with the expanded European Economic Community. Its inclusion in Volume I is enough to make that text of incalculable value for future international economic negotiations,” Patterson said.

He added that the message of Caribbean confidence and unity in global trade affairs is still relevant today amid the challenges faced by the region to provide its citizens with energy and food, and to combat ignorance and disease in an era of global warming and health pandemics.

Patterson said the technical work and policy advocacy that McIntyre and others undertook during the 1970s, at the height of the Cold War, in calling for a new international economic order, continued to be relevant today.

“The war between Russia and Ukraine has dramatically exposed the impotence of the United Nations. The Russia-Ukraine war, which threatens food security and has escalated energy prices on top of the COVID pandemic, and the devastating impact of climate change, all point to the compelling urgency for fundamental changes in the international order, both in terms of peace and security as well as for the economic survival of developing countries. There is a compelling need for change to a derelict and iniquitous architecture,” he urged.

Patterson observed, too, that while McIntyre had a profound knowledge of sound economic theory, the economist was even more excited by the prospects of utilising that knowledge as a tool of social engineering. According to Patterson, the former UWI vice chancellor attached absolute priority to the development of human resources for growth and building leadership capacity in the Caribbean.

McIntyre was perturbed, Patterson said, by the high a proportion of students in Caribbean societies who leave school without the basic cognitive and numerical skills required in the workplace, noting in his writings that complaints were widespread about the large number of students who leave primary schools and even secondary schools as semi-literates.

“McIntyre accepted that within the confines of available public resources during periods of modest economic growth, governments are forced to insist on accountability in the education sector and cannot duck the burning issue of proportionality even as they seek to improve the foundations of learning during early childhood,” he remarked.