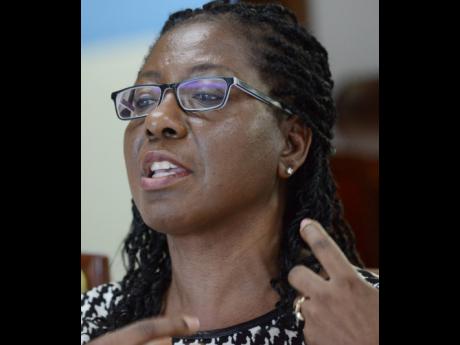 Constance Hall, actuary and director of the Pension Industry Association of Jamaica.

Exploration of possible solutions to the ageing population crisis in the Caribbean is bending towards governments’ adopting a programme that slashes pension payouts into smaller weekly amounts, while simultaneously delaying payouts beyond the set...

Exploration of possible solutions to the ageing population crisis in the Caribbean is bending towards governments’ adopting a programme that slashes pension payouts into smaller weekly amounts, while simultaneously delaying payouts beyond the set retirement age, particularly for individuals still employed.

But few people are in favour of extending the working age and reducing pension benefits, with the proposal getting only three per cent support in a poll carried out by the Caribbean Economic Forum. Most respondents were in favour of increased contribution rates by workers.

Still, Derek Osborne, senior partner and actuary at LifeWorks in The Bahamas, is insisting that this unpopular opinion might just be the fix to the Caribbean’s rising public pension expenditure as a percentage of gross domestic product, or GDP, which is the measure of economic output.

“What we have found is that the information is there, the recommendations are there, but it’s the government pulling the trigger on what may be seen as unpopular today but is necessary for 2030,” said Osborne at a central bank forum on the ageing crisis.

“The options are limited and getting fewer. From the pension perspective, it has to be a combination of smaller benefit promises that starts later in life and especially starting later for those people who are over 60 and still working,” he said.

But Actuary and Eckler Principal, Constance Hall, who is a director of the Pension Industry Association of Jamaica, PIAJ, is pushing back on the proposal, arguing the approach to reforming social security programmes must be tailored to each country’s circumstance.

A broad-brush approach would prove counter-productive, she said.

“When you listen to complaints about the National Insurance Scheme (NIS) what do you hear? The pensions are too small. Maybe the pension payouts in other Caribbean countries are enough, but in Jamaica, we can’t bring our pensions down we have to push them up,” Hall told the Financial Gleaner.

“In Jamaica, our solution is that we have to contribute more, like it or not,” she said.

In Jamaica, the private pensions market was last valued at $713 billion at the end of 2021, but those assets only cover just over four per cent or less than 142,000 working Jamaicans. The National Insurance Scheme, being mandatory, covers a larger swathe of the working population but its pension payouts are small.

The current public contribution rates is an improvement on what obtained in 2018, but some pension analysts want further adjustments to at least 10 per cent of salaries up to $10 million, no only to give retirees a better income but to ensure the long-term viability of the public pension.

Persons are living longer, putting pressure on pension funds, in what has been labelled the ‘greying of the population’. Jamaica increased and equalised the retirement age to 65 for men and women in 2016, in partial response to the problem.

A study of the Caribbean’s ageing reality in 1999 found that there was a significant decline in mortality, leading to an increase in population; but that at the same time fertility rates were declining which led to a decrease in the younger population and a trend towards an increased population of the older age group. There was also an increased life expectancy.

Life expectancy, on average, was estimated to be 70 years for men across the region and more than 70 years in all the countries for women, except for Guyana. It was in line with that which existed in some of the more highly developed countries, for example the United States at 76.7 years and the United Kingdom at 77 years.

Some of the changes in the Caribbean were attributed to public health improvement, general upliftment in the standard of living, improved education for women, and successful family planning programmes.

But the increased life expectancy rate coupled with declining fertility rates brings its own set of challenges. The worsening old-age dependency ratio, — which is the ratio of older dependants, that is, people older than 64, to the working-age population, that is, those aged 15 to 64 — is a global phenomenon.

But the Caribbean is said to be trending consistently with the World Bank and International Monetary projection that the ratio of older dependants over 65 to the working age population population in the region will double by 2040.

That has implications for the labour force in the future and by extension, the ability of social security schemes to maintain social safety nets. The result could be a reduction in standards of living and governments’ abilities to provide pensions for citizens.

“... The pension promise is unsustainable because when we look down the road, 15 to 20 years from now, we will have no more money unless something big happens soon. We have these conflicting priorities; we want more benefits and we want to be able to provide for those at the lower end of the income structure. But we also don’t want to have employers and employees paying 25 per cent contribution rates. So we have to find that delicate balance,” Osborne said at the forum hosted by the Central Bank of Barbados.

In elaborating on his proposal for smaller pension payouts, Osborne explained that it doesn’t mean everyone will be getting less.

But Hall reasoned that old-age dependency and social security programmes are separate issues and, as such, require different solutions. In dealing with the issue of old age dependency, she said the solution has to be one that sees the government working overtime to create a society where women want to have children and want to raise their families.

“Many of our women wish not to have children because of issues related to violence and economic hardship, and for those of us who have children, or children are somewhere else. They’re not in Jamaica,” she said.

That aside, Hall is also contending that the proposal to extend pension payouts.

“Sixty-five is the most common retirement age in the country. Let’s say we were to push the NIS retirement age from 65 to 67; what would happen? My company retires me at age 65, my NIS pension doesn’t start until I’m 67, what do I do for those two years?” she said.

“A move of retirement age would have to be a national discussion, both the private sector and the Government would have to be on board so that when people retire the pension comes at the same time. Otherwise we will be creating a new problem,” the actuary said.