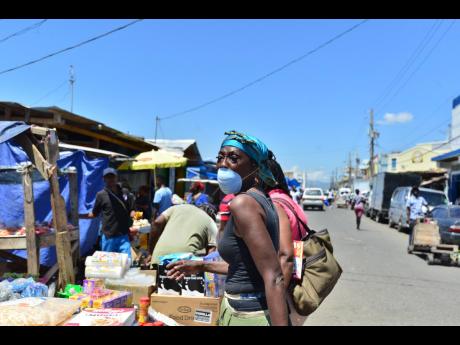 File
Persons are seen at Coronation Market, downtown Kingston, in 2020. The area is encapsulated in a multibillion plan for the development of a market and commercial district.

A preliminary price tag of about $304 billion has been pegged to an implementation plan and rail service that form part of the proposed redevelopment of downtown Kingston’s market and commercial district – one of about nine such designated areas in...

A preliminary price tag of about $304 billion has been pegged to an implementation plan and rail service that form part of the proposed redevelopment of downtown Kingston’s market and commercial district – one of about nine such designated areas in the downtown area of the capital city.

The resumption of the mothballed rail service as part of a proposed multimodal transport network for the city carries a price tag of US$1 billion, or approximately $153.4 billion, eclipsing the $151 billion estimate for the rest of the master plan.

The area runs from the bustling shopping hub of Orange Street, westwards to Tivoli Gardens. It extends from Port Royal Street near the Kingston waterfront, and northwards to Spanish Town Road and Heywood Street.

The Jamaican Government, as part of a contemplated public-private partnership, or PPP, is expected to shop the plan to the World Bank and its private-sector lending arm, the International Finance Corporation, IFC, for a loan to pay for aspects of the development, particularly infrastructure work. The precise size of the possible loan ask is not yet known, as some elements of the US$151-billion budget, it is hoped, will be offset by cash-and-kind investments by the PPP partners.

In February, Kingston-based urban planning firm Inter Plan Consultants completed the master plan for the market district as part of a contract valued at approximately US$525,000, which was awarded in October 2019 to Spanish company Investigación y Control de Calidad, or INCOSA, which entered a joint venture with Servicios Integrales de Contración e Intermediación DOMINUS SL to undertake the project. Inter Plan is the local representative of INCOSA/DOMINUS.

The plan’s $151-billion implementation budget and a cost-benefit analysis are said to be awaiting verification by the IFC. The planning work is funded by the World Bank, which provided the government with a US$50-million loan in 2014 under the Foundations for Competitiveness and Growth Project to carry out several business enhancement initiatives. Projects funded by the loan are being coordinated by the Planning Institute of Jamaica, PIOJ, but the capital city’s redevelopment initiatives are being led by the Urban Development Corporation, UDC.

Martin Addington, principal of Inter Plan Consultants, says the repayment of the prospective World Bank loan for the market district would not be borne by Jamaican taxpayers, but financed from the sale and rental of redeveloped commercial and residential properties.

“We are putting forward some major proposals for redevelopment and infrastructure. The idea is to have a land swap agreement with the property owners, and we would rebuild the area in a mix-use development, doubling the amount of commercial space from one million square feet and adding up to 8,000 apartments. Our view is that the increased density from the additional units should pay for all of the infrastructure improvements required and the construction expense,” Addington told the Financial Gleaner in an interview.

The government’s contribution to the development would be several parcels of land it is said to own in the market district.

“Much of the land there is government-owned. There is a lot of unused, vacant lands there, so we felt that would be a good launching point for the whole redevelopment,” said Addington.

“It wouldn’t be dependent on the government allocating any special budget towards its implementation. We want the government to put up the lands. That would be their contribution and a considerable investment that the government would make,” he said.

The urban planner has also engaged the finance ministry in talks about the important role that urban tax and other incentives can play in the redevelopment effort, and says Finance Minister Dr Nigel Clarke has signalled his support for the venture, but is also awaiting verification of the implementation budget.

The planners are also mulling the possibility of additional incentives under the Special Economic Zones Act.

“We have been talking with Jamaica Special Economic Zones Authority to declare it an SEZ during the construction, so there are additional incentives to make the project affordable,” Addington said.

In the plan, which has been discussed over the better part of the last two years with several other stakeholders, including the Private Sector Organisation of Jamaica, Jamaica Chamber of Commerce, businesses owners, vendors associations, Kingston Creative, UDC, PIOJ, the Kingston and St Andrew Municipal Corporation, and several government ministries and agencies, consideration has been given to housing for residents of the area.

“In this district 90 per cent of the occupiers of the space are commercial. We have a very small number of residents living there; about 11 families that we have identified. There are a few persons along the edge of the gully as well. We plan to create accommodation for them. So we won’t be displacing anybody, and that would be paid for in the overall cost,” Addington said.

The master plan is said to have drawn on many previous plans produced over many decades dating back to the 1960s, and calls for the reintroduction of rail transport, with an overhead rail network connecting downtown with other Kingston hubs, such as Cross Roads and Half-Way Tree, but also extending to Spanish Town and the new township to be built at Bernard Lodge, both in the neighbouring parish of St Catherine. The Port Authority of Jamaica is to be engaged on a proposed downtown Kingston pier for cruise ships, and discussions are said to be ongoing with the National Housing Trust for its take-up of some residential units under the NHT Guaranteed Purchase Programme.

The block-by-block development that also envisages the reconstruction of the Coronation, Jubilee and other produce markets as multistorey commercial complexes, has been phased over potential horizons ranging from 10 to 30 years.

A major variation from previous downtown development plans, Addington said, is the intention to utilise the proposed PPP coordinating entity — a proposed company — to implement all the work, including infrastructure and utilities, rather than relying on various government entities, such as the National Water Commission and the National Works Agency, to implement discrete aspects of the proposed development.

“Rather then waiting on NWC, for example, to develop its own budget and implementation schedule for the infrastructure that needs to be replaced, this plan [includes] all that work as part of the proposal in order to handle the coordination better, and then the infrastructure would be handed over to the NWC when completed.”

The final plan was presented to stakeholders at a workshop in February, and now a framework alliance contract is being developed, which outlines the responsibilities of the signing parties in the governance structure that is yet to be settled.

The security aspect of the plan includes a network of surveillance cameras, police kiosks and an upgraded station, as well as several social intervention programmes for surrounding communities, including central Kingston, Tivoli Gardens and Denham Town.

“We want to have a long-term programme with a pipeline of economic opportunities for the people, especially the young male population: job and personal development training, entrepreneurial projects, etc. We are hoping that those long-term programmes will help with the crime situation,” Addington said.