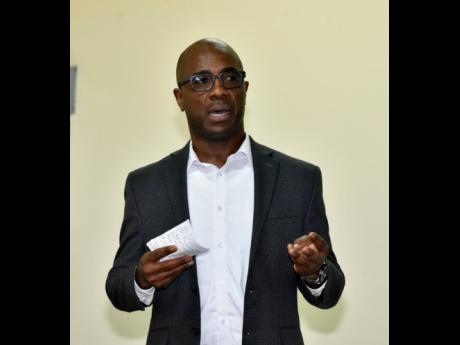 The Bank of Jamaica and one of the staunchest critics of its current programme of monetary tightening, the Private Sector Organisation of Jamaica, PSOJ, appear agreed on the soundness of the spending and taxation habits of the Jamaican government...

The Bank of Jamaica and one of the staunchest critics of its current programme of monetary tightening, the Private Sector Organisation of Jamaica, PSOJ, appear agreed on the soundness of the spending and taxation habits of the Jamaican government in so far as fiscal policy intersects with the central bank’s BOJ’s mandate for inflation control.

This comes amid heightened public debate about the drivers of inflation, which has breached the agreed 4-6 per cent band for over a year, and against the backdrop of ongoing disagreement between the central bank and the business sector about how to contain price escalations.

“The domestic fiscal policy stance continues to pose no risk to inflation over the near term,” the BOJ’s Monetary Policy Committee, MPC, said in its September 29 decision, as it has maintained in previous summaries.

In its latest decision, the MPC increased the benchmark policy rate to 6.5 per cent.

In a response to the latest rate hike, PSOJ vice-president and co-chair of its economic policy committee, Dr Adrian Stokes, pointed to the soundness of the government’s fiscal policy as running counter to the BOJ’s assertion that its successive interest rate increases – nine since September last year – are needed to prevent capital flight to US dollar assets.

In the most recent disclosures by the Ministry of Finance, tax revenues collected up to August were tracking 27 per cent ahead of last year, while the fiscal deficit was just around $2 billion.

The central bank, which has been closely watching global monetary policy moves, particularly in the United States, said last week that the latest round of US monetary tightening, with the Federal Reserve Board having raised its benchmark funds rate by 75 basis points on September 21, was above BOJ expectations. It noted, too, that the Fed also changed its forward guidance to signal that interest rates could rise to 4.4 per cent by the end of 2022, and to 4.6 per cent by the end of 2023.

Stokes is of the view that the BOJ’s preoccupation with the prospect of capital flight because of the aggressive Fed stance is misplaced.

“There is still a healthy spread between Jamaican dollar and US dollar assets, especially assets where capital tend to frequent in the form of bonds and so on. In the shorter segment of the market, I believe portfolio decisions about currency have already been made, and any reallocation that will be made is marginal,” the PSOJ representative said, in counter to the central bank’s analysis.

“Capital flight is more a phenomenon of country risk. People will pull their capital out of a country if they are concerned about, in particular, fiscal trajectory and the riskiness of the government and the country,” said Stokes, a former bank executive.

He added that those situations do not exist in Jamaica.

“Our fiscal situation is very sustainable and I think that risk is not a material risk, and that will give investors a lot of confidence to keep their capital invested in Jamaica,” he added.

The convergence of the views of the central bank and the PSOJ on government’s fiscal policy, even in the midst of sharp differences over the BOJ’s monetary response, is noteworthy, given the situation in Jamaica’s two largest trading partners – the United States and Britain – where their governments are being accused of pursuing spending and tax policies that have caused, or are likely to fuel inflation.

Inflation in the US is being blamed not only on pandemic-related supply chain disruptions and shortages and the effects of the Russia-Ukraine war, but also on the trillions in pandemic rescue spending that the Biden administration has doled out to businesses and individuals over the past two years. There have been billions more on infrastructure and other spending to boosts the American economy.

The latest attempts by the British government to effectively inject large amounts of cash into the United Kingdom economy through massive unfunded tax cuts for the top income earners, drew rebuke from the Bank of England, the International Monetary Fund and skittish financial markets fearful of the ultimate end results of increased government borrowing on interest rates, the value of the British pound and investment yields.

Amid the firestorm, new UK Prime Minister Liz Truss and Chancellor of the Exchequer Kwasi Kwarteng began backtracking on the plan this week.

Critics of the BOJ’s nine rate hikes, six of which occurred this year, have consistently made the point that inflation in the US and UK have been largely influenced by factors such as government spending and consumer savings, which have helped to boost aggregate demand amid shortages, leading to economic overheating. As a result, business advocates argue, US and UK inflation can be corralled back to targeted levels by increasing interest rates with only relatively mild negative consequences and without long-term devastation to production and economic growth.

In the Jamaican context, where inflation is driven largely by external factors, representatives of the manufacturing sector and the PSOJ have contended that repeated interest rate increases will significantly push up financing costs for businesses, dampen consumer spending, and stifle economic growth without necessarily bringing down inflation.

Still, the latest rate increase by the central bank came as no surprise to Stokes, given what he maintains has been the BOJ’s hawkish monetary policy posture.

“I continue to believe that they are making a mistake. In a few quarters to come that mistake will be seen,” he said in an interview with the Financial Gleaner.

“The Fed is trying to slow the US economy. The world economy is slowing, and my fear is that rather than having a gentle slowing of our economy – which is not a good thing, because we are still operating below 2019 peak – the handbrake could be pulled up on economic activity,” said Stokes.

“We will end up having a double whammy of the BOJ rate increases taking effect and the knock-on effects of the global slowdown. One wonders what will happen at that point.”

On the central bank’s expression of concern about the slow adjustments of deposit rates and its suggestion that continued policy rate increases will help to nudge interest rates on deposits upwards, Stokes said that the argument betrays a lack of understanding on the part of the BOJ of the mechanics of interest rate response in the retail banking system.

“The pass-through to deposit rate is not probably what the central bank thinks. The truth is, if the banks were to increase their loan rates by 600 basis points, then we would have a different problem in our economy right now,” said the PSOJ representative.

“I believe the banking sector is doing the BOJ a favour, especially on the loan side, by not increasing loan rates as dramatically as the BOJ has increased its policy rate.”

The average Jamaican with a mortgage cannot afford a mortgage rate that would have been at around 13 per cent if they had moved commensurately with the BOJ signals, he said.