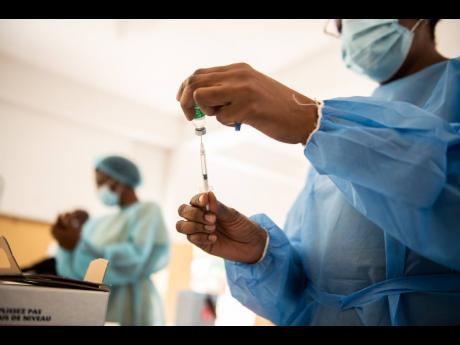 File
In this March 2021 photo, nurses prepare COVID-19 vaccines at a home for the elderly in Kingston.

A senior World Bank official on Tuesday said that the gross domestic product, or economic output, of Caribbean economies has not yet recovered to its 2019 level as the region emerges from being among the hardest-hit regions by the coronavirus pandemic.

“We are not expecting that to be the case until 2024, and that reflects the overall slow rate of recovery in the region. Part of that is, we know that many of the islands are tourism-dependent and we had a hard time getting a handle on COVID,” said William Maloney, the World Bank’s chief economist for Latin America and the Caribbean.

He told reporters that many countries in the region are still recording low vaccination rates against the virus that has killed and infected millions of people globally.

Most were below 40 per cent, “which leaves us vulnerable to whatever new variant comes. It is important to realise that COVID is in recession right now, but it is very unpredictable and we have to be prepared for whatever is coming, and that means those vaccination rates will have to rise…,” Maloney said.

He added that the region was also hard hit by the Ukraine crisis occasioned by Russia’s invasion of the eastern European country since February 24, “because we are net food and fuel importers, with perhaps the exception of Trinidad & Tobago, and so that puts additional strain on household budgets and government finances”.

“So this has made it a very difficult couple of years for the Caribbean,” he added, citing Haiti in particular.

“They continue to struggle with multiple-pronged crises. You have got gang violence, lingering political and institutional instability, and we have had persistent vulnerability to natural shocks. COVID of course exacerbated these, and, unfortunate, to date it has a low vaccination rate.”

“So the short-term and the medium-term situation is not extremely positive. The bank continues to support recovery from the 2021 earthquake by strengthening disaster risk capacity … and we have also been working hard to address problems to access to quality learning, and to mitigating Haiti’s food insecurity,” Maloney said.

Several other Caribbean economies are expected to grow this year, but lose some of their steam in the following year. For example:

 Barbados is expected to register 10.5 per cent growth this year, but drop to five per cent next year;

 Jamaica’s economy is projected to grow 3.2 per cent, but is forecast to fall to two per cent afterwards;

 Dominica is expected to expand by 5.8 per cent, then fall to five per cent;

 Grenada’s economic growth this year is estimated at 3.8 per cent, and 3.4 per cent the following year;

 St Lucia’s economy will grow by 7.9 per cent, then fall to six per cent;

 The Bahamas is forecast to grow eight per cent in 2022 and 4.1 per cent next year; and

 Guyana, which has been experiencing “astronomically high growth” due to its oil discovery, is projected to expand by 57.8 per cent this year, but fall back to 25.2 per cent growth next year.

“Those are extraordinary growth rates, reflecting the development of this new sector, and any government will have a challenge in managing those resource flows to be sure that you did not set off inflation within the country; and the central bank would need to take measures to control that,“ Maloney said of the Guyanese economy.

The World Bank did not give an economic growth forecast for Trinidad & Tobago.

Regarding the wider Latin America and Caribbean, or LAC, region, Maloney said some economies had been hit hard by rising energy and food prices.

Some countries have been subsidising oil and fuel prices across the board, including persons not in need, at a cost to their economies, the economist noted.

“So the savings we are talking about is precisely the gains that would be gleaned from better targeting those kinds of relief efforts. So it is not about eliminating all support to families. It is probably better from an economic point of view to not subsidize these products directly, but to increase transfers to vulnerable families; and that’s probably more efficient from an economic point of view,” he said.

“But again, to reiterate, we are not talking about eliminating support to poor families hit by these higher prices,” he emphasised.

As to the trend towards monetary tightening to contain inflation, the economist noted the difficult situation in which countries are caught.

“We have to be completely honest, that the tools we have for combating inflation are not fine instruments. Raising interest rates works on inflation precisely by reducing aggregate demands for products,” he said. “So the art for this … is, you are going to raise interest rates enough so that people could see that inflation is under control, and that expectations aren’t rising … but not enough to drive the economy into a recession.”