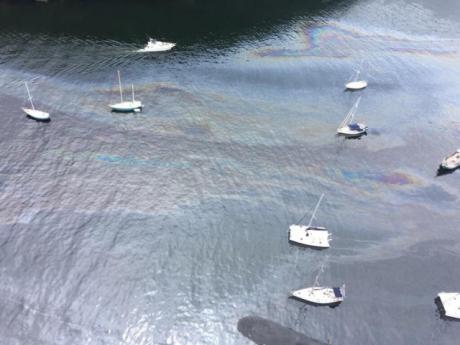 Environmental advocacy groups in Trinidad and Tobago are raising alarm over what they say is a massive oil spill in Chaguaramas.

In a more than one-minute long video posted on Facebook early this morning, attention was drawn to waters in an area which appeared to be black.

“There is an oil spill here and it’s so massive. This is all like a porridge of oil..the whole place is covered in oil,” Gary Aboud, secretary for Fishermen and Friends of the Sea in the Twin Island Republic, appearing in the video, said.

Amid his outrage, he further pointed out that the oil spill spanned miles into the sea and called for the Government to immediately react to the disaster.

Meanwhile, the Environmental Management Authority (EMA) in Trinidad and Tobago said it was advised this morning of reports of an oily substance in the waters between Carrera Island and the Chaguaramas Peninsula.

It said on receipt of the information, the EMA in accordance with its coordinating role, immediately notified the Office of Disaster Preparedness and Management (ODPM), Institute of Marine Affairs (IMA), Ministry of Energy and Energy Industries (MEEI) and the Maritime Services Division (MSD).

The EMA said a team is on site investigating this incident with the assistance of the Air Guard of the Trinidad and Tobago Defense Force (for aerial surveillance) and a vessel provided by the IMA.