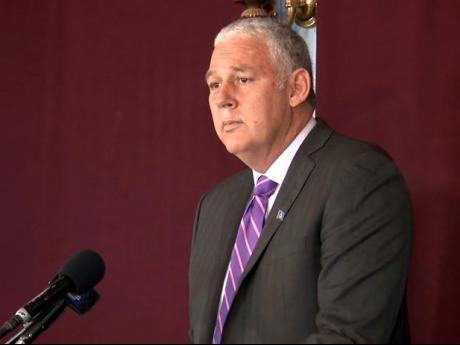 Chastanet: "I believe that everything we have done is to put St Lucia on the right footing to true progress and our policies will continue to benefit St Lucians from all walks of life." - Contributed photo.

But, Chastanet said that he remains confident the policies and programmes initiated by his administration over the last five years would put St Lucia on the right foot to true progress.

The UWP, which had won the 2016 general elections by an 11-6 margin, was only able to win two seats on Monday, suffering a 13-2 defeat with the other two seats going to independent candidates, who at one time were members of the party.

Leader of the St Lucia Labour Party (SLP), Phillip J. Pierre, is likely to be sworn in later on Tuesday.

In a message, Chastanet thanked supporters “who stood with me and our government in this election and over the last five years. We have stayed focused and strong.”

He said he was also thankful for their prayers and that “it was truly a privilege to serve you as Prime Minister.

“It was also a special honour to serve with a remarkable team of men and women. I am proud of the slate we put forward during this campaign,” he said, adding “I believe that everything we have done is to put St Lucia on the right footing to true progress and our policies will continue to benefit St Lucians from all walks of life.

“If there is one thing that remains true as you look around our island, is the work of the UWP is present in both our country's physical development and the development of our people,” Chastanet said.

“We know in our hearts the core values that have carried us through: honesty, respect, teamwork and commitment,” he said, confirming that he has since called Pierre “to congratulate him and I wish him the best”.

Meanwhile, the Caribbean Community (CARICOM) Observer Team (GEOM) that monitored the polls said the voters were able to cast their ballots without intimidation or fear.

In addition, the CARICOM group said that the results “reflect the will of the people of St Lucia.”

The 10-member group, led by Fern Narcis-Scope, the chief election officer of the Trinidad and Tobago Elections and Boundaries Commission, noted that it had also witnessed the advanced polls held last Friday.

GEOM said that its members had also visited a majority of the polling stations across the 17 constituencies, monitoring the polling activities, as well as visiting the St Lucia's Parliament, where election commission officials were receiving the election results electronically.

“From observations, the polls were opened in a timely manner in the majority of the polling districts. All the stations observed were fully staffed and most had at least four polling agents present, representing the two major political parties that contested the general election.

“Most polling stations were conveniently located and easily accessible to the voters, though some instances of accessibility challenges for the disabled, elderly and infirmed were noted. The mission observed that there was an adequate supply of the required voting material, which arrived promptly to facilitate the opening of the polls. “

The GEOM said that adequate police security was in place at all locations visited, with officials conducting their duties in a professional and efficient manner.