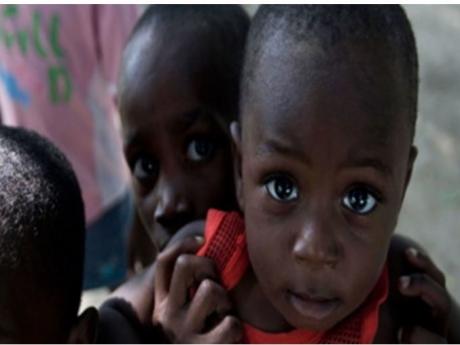 UNICEF said that more than a half-million children in southwestern Haiti without access to shelter, drinking water and hygiene facilities are increasingly under threat from acute respiratory infections, cholera and malaria - Contributed photo.

PORT AU PRINCE, Haiti, CMC – The United Nations Children's Fund (UNICEF) is warning that more than half a million children are at risk of life-threatening waterborne diseases following the devastating and powerful earthquake that rocked Haiti on August 14.

It said that rains have also put an estimated 540,000 children in southwest Haiti at risk of contracting waterborne diseases.

“The lives of thousands of earthquake-affected children and families are now at risk, just because they don't have access to safe water, sanitation and hygiene,” said Bruno Maes, UNICEF Representative in Haiti.

The magnitude 7.2 magnitude earthquake that ripped through mainly the southern section of Haiti was followed days later by Tropical Depression Grace, which exacerbated the suffering and increased the devastation.

UNICEF said that more than a half-million children in southwestern Haiti without access to shelter, drinking water and hygiene facilities are increasingly under threat from acute respiratory infections, diarrhoeal diseases, cholera and malaria.

“Cholera has not been reported in Haiti since February 2019, yet without urgent and firmer action the re-emergence of cholera and other waterborne diseases is a real threat that is increasing by the day,” said Maes.

UNICEF said it is calling for the international community to urgently provide additional funding for the humanitarian response and prevent the emergence of waterborne diseases in Haiti.

Prior to August 14, only over half of the healthcare facilities in the country's three departments most shaken by the earthquake had basic access to water services.

In its aftermath, nearly 60 per cent of people in those three departments lack safe water as thousands of the houses that collapsed lost access to sanitation, due in part to the earthquake.

Along with the National Directorate for Water and Sanitation (DINEPA) and other partners, UNICEF aims to improve access to water, sanitation and hygiene facilities for affected families.

Besides that, more than 35,200 people have also been given hygiene kits, including household water treatments products, water storage, hand washing devices and hygiene pads.