Haitians on Texas border undeterred by US plan to expel them 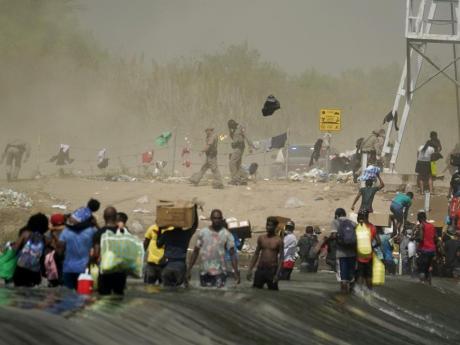 A dust storm moves across the area as Haitian migrants use a dam to cross into and from the United States from Mexico, Saturday, September 18, 2021, in Del Rio, Texas. The US plans to speed up its efforts to expel Haitian migrants on flights to their Caribbean homeland, officials said Saturday as agents poured into a Texas border city where thousands of Haitians have gathered after suddenly crossing into the US from Mexico. (AP Photo/Eric Gay)

DEL RIO, Texas (AP) — Haitian migrants seeking to escape poverty, hunger and a feeling of hopelessness in their home country said they will not be deterred by plans by United States officials to speedily send them back, as thousands of people remained encamped on the Texas border Saturday after crossing from Mexico.

Scores of people waded back and forth across the Rio Grande on Saturday afternoon, re-entering Mexico to purchase water, food and diapers in Ciudad Acuña before returning to the Texas encampment under and near a bridge in the border city of Del Rio.

Junior Jean, a 32-year-old man from Haiti, watched as people cautiously carried cases of water or bags of food through the knee-high river water.

Jean said he lived on the streets in Chile for the past four years, resigned to searching for food in garbage cans.

“We are all looking for a better life,” he said.

The Department of Homeland Security said Saturday that it moved about 2,000 of the migrants from the camp to other locations Friday for processing and possible removal from the US Its statement also said it would have 400 agents and officers in the area by Monday morning and would send more if necessary.

The announcement marked a swift response to the sudden arrival of Haitians in Del Rio, a Texas city of about 35,000 people roughly 145 miles west of San Antonio.

It sits on a relatively remote stretch of border that lacks the capacity to hold and process such large numbers of people.

A US official told The Associated Press on Friday that the US would likely fly the migrants out of the country on five to eight flights a day, starting Sunday, while another official expected no more than two a day and said everyone would be tested for COVID-19.

The first official said operational capacity and Haiti's willingness to accept flights would determine how many flights there would be.

Both officials were not authorised to discuss the matter publicly and spoke on the condition of anonymity.

Told of the US plans Saturday, several migrants said they still intended to remain in the encampment and seek asylum. Some spoke of the most recent devastating earthquake in Haiti and the assassination of President Jovenel Moïse, saying they were afraid to return to a country that seems more unstable than when they left.

“In Haiti, there is no security,” said Fabricio Jean, a 38-year-old Haitian who arrived with his wife and two daughters. “The country is in a political crisis.”

Haitians have been migrating to the US in large numbers from South America for several years, many having left their Caribbean nation after a devastating 2010 earthquake.

After jobs dried up from the 2016 Summer Olympics in Rio de Janeiro, many made the dangerous trek by foot, bus and car to the US border, including through the infamous Darien Gap, a Panamanian jungle.