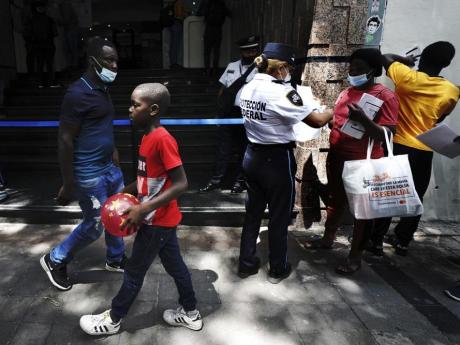 MEXICO CITY (AP) — Mexico sent another planeload of Haitian migrants back to their homeland Wednesday on a flight carrying 129 people to Port au Prince.

Unlike the first repatriation flight in late September, Mexico did not specify that all those aboard Wednesday's flight were returning voluntarily, and some appear to have been escorted up the steps to the plane by immigration agents.

In addition, police, National Guard and immigration agents stood on both sides of the stairs leading to the plane.

Wednesday's flight took off from Tapachula, the city near the Guatemalan border where thousands of Haitians wait for their asylum or refugee claims to be processed.

In early September, groups of hundreds of migrants set out walking from Tapachula, in many cases fed up with waiting for the overburdened asylum system to process their cases.

Each time, Mexican authorities broke up the groups.

Later in the month, some 15,000 mostly Haitian migrants appeared at the Mexico-US border.

Some of them also had open asylum cases in Mexico but had grown tired of waiting.

US authorities spent a week clearing that camp in Del Rio, Texas, deporting some directly to Haiti and releasing others into the United States with the expectation they would appear before immigration officials at a later date.

Some of those migrants who were detained by Mexican authorities in Ciudad Acuña, across from Del Rio, were sent back south to Tapachula.