Group clings to faith as US works on Haiti kidnapping case 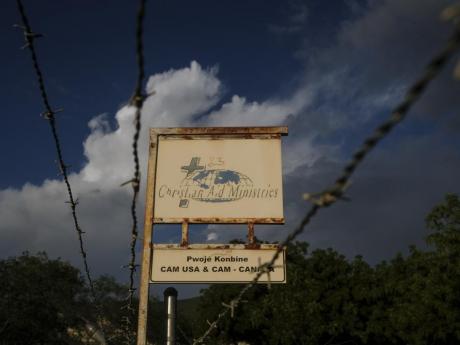 A custom sign stands outside Christian Aid Ministries in Titanyen, Haiti, Thursday, October 21, 2021. The leader of the 400 Mawozo gang that police say is holding 17 members of the kidnapped Christian Aid Ministries missionary group is seen in a video released Thursday saying he will kill them if he doesn’t get what he’s demanding. (AP Photo/Matias Delacroix)

PORT-AU-PRINCE, Haiti (AP) — A United States religious organisation whose 17 members were kidnapped in Haiti asked supporters on Friday to pray and share stories with the victims' families of how their faith helped them through difficult times as efforts to recover them entered a sixth day.

Ohio-based Christian Aid Ministries issued the statement a day after a video was released showing the leader of the 400 Mawozo gang threatening to kill those abducted if his demands are not met. Haitian officials have said the gang is seeking $1 million ransom per person, although they said it wasn't clear if that includes the five children in the group, the youngest being 8 months old.

“You may wonder why our workers chose to live in a difficult and dangerous context, despite the apparent risks,” the organisation said. “Before leaving for Haiti, our workers who are now being held hostage expressed a desire to faithfully serve God in Haiti.”

The FBI is helping Haitian authorities recover the 16 Americans and one Canadian. A local human rights group said their Haitian driver also was kidnapped.

“Pray that their commitment to God could become even stronger during this difficult experience,” Christian Aid Ministries said.

At the White House on Friday, US press secretary Jen Psaki sidestepped questions about whether the Biden administration would look to halt deportations of Haitians to their home country or consider adding a US military presence on the ground in response to the missionaries' kidnappings.

“We are working around the clock to bring these people home,” she said.

“They are US citizens, and there has been targeting over the course of the last few years of US citizens in Haiti and other countries too...for kidnapping for ransom.

That is one of the reasons that the State Department issued the warning they did in August about the risk of kidnapping for ransom.”

Psaki spoke a day after a couple hundred protesters shut down one neighbourhood in Haiti's capital to decry the country's deepening insecurity and lack of fuel blamed on gangs, with some demanding the resignation of Prime Minister Ariel Henry.

The streets of Port-au-Prince were largely quiet and empty on Friday, although hundreds of supporters of Jimmy Cherizier, leader of “G9 Family and Allies,” a federation of nine gangs, marched through the seaside slum of Cité Soleil.

As they marched, the supporters sang and chanted that G9 is not involved in kidnappings.

Some of them were carrying high calibre automatic weapons.

“This is the way they are running the country,” Cherizier, who is implicated in several massacres, said as he pointed to trash lining the streets with his assault weapon.

Amid the worsening insecurity, the office of Prime Minister Ariel Henry announced late Thursday that Léon Charles had resigned as head of Haiti's National Police and was replaced by Frantz Elbé.

The newspaper Le Nouvelliste said Elbé was director of the police departments of the South East and Nippes and previously served as general security coordinator at the National Palace when Jocelerme Privert was provisional president.