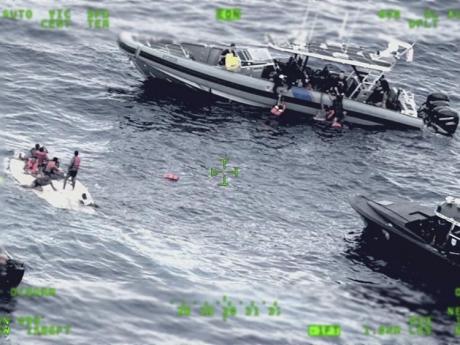 This photo released by the Seventh US Coast Guard District shows people standing on a capsized boat (left) as some of its passengers are pulled up on to a rescue boat, top, in the open waters northwest of Puerto Rico, Thursday, May 12, 2022. Some people have been rescued while others were found dead after the boat carrying suspected migrants capsized. The boat was first spotted by US Customs and Border Protection. (Seventh US Coast Guard District via AP)

SAN JUAN, Puerto Rico (AP) — Haitians are fleeing in greater numbers to the neighbouring Dominican Republic, where they board rickety wooden boats painted sky blue to blend with the ocean to try to reach Puerto Rico — a trip in which 11 Haitian women drowned this week, with dozens of other migrants believed missing.

It was the latest fatal trip as US authorities said they have detained twice the number of migrants in and around US jurisdictions in the Caribbean in the past year compared with a year earlier.

Garrett and others say Haiti's political instability, coupled with brutal gang violence and a crumbling economy, have prompted people to flee, with more doing so via the Dominican Republic.

Both countries share the island of Hispaniola, which lies west of Puerto Rico, with a treacherous area known as the Mona Passage separating the two.

n the most recent capsizing, spotted on Thursday, 11 bodies of Haitian women were found and 38 people rescued — 36 of them Haitians and two from the Dominican Republic. Authorities say one of those rescued was charged with human smuggling.

The boat capsized about 11 miles (18 kilometres) north of the uninhabited island of Desecheo, west of Puerto Rico. Dozens are believed missing.

Garrett said it's unclear exactly how many migrants were aboard the boat, but said survivors provided authorities with their own estimates.

“The numbers we're hearing are somewhere between 60 and 75,” he said.

The search continued Friday, with the US Coast Guard scouring the open waters northwest of Puerto Rico via boat, plane and helicopter.

Rescue efforts began on Thursday after a US Customs and Border Protection helicopter saw people clinging to the capsized boat, said US Coast Guard spokesman Ricardo Castrodad, adding that crews worked through the night.

“We always look for the possibility of finding survivors,” he said.

Authorities released images showing migrants desperately holding onto the boat in open waters as they awaited rescue. Once ashore, the migrants were escorted down a pier, with at least one wearing nothing but underwear. Some were taken to ambulances, and eight Haitians remained hospitalised on Friday.