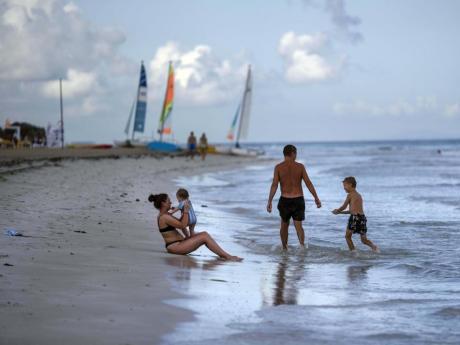 Tourists are seen along the beach at the Iberostar Selection Varadero hotel in Varadero, Cuba, on September 29, 2021. The Biden administration announced Monday that it will expand flights to Cuba and lift Donald Trump-era restrictions on remittances that immigrants can send to people on the island. (AP Photo/Ramon Espinosa, File)

WASHINGTON (AP) — The Biden administration announced Monday that it will expand flights to Cuba, take steps to loosen restrictions on US travellers to the island, and lift Trump-era restrictions on remittances that immigrants can send to people on the island.

The State Department said in a statement that it will remove the current $1,000-per-quarter limit on family remittances and will allow non-family remittance, which will support independent Cuban entrepreneurs.

The US will also allow scheduled and charter flights to locations beyond Havana, according to the State Department.

The administration said it will also move to reinstate the Cuban Family Reunification Parole Program, which has a backlog of more than 20,000 applications, and increase consular services and visa processing.

“With these actions, we aim to support Cubans' aspirations for freedom and for greater economic opportunities so that they can lead successful lives at home,” State Department spokesman Ned Price added.

“We continue to call on the Cuban government to immediately release political prisoners, to respect the Cuban people's fundamental freedoms and to allow the Cuban people to determine their own futures.”

The policy changes come after a review that began soon after a series of widespread protests on the island last July.

Former President Donald Trump had increased sanctions against Cuba, including the cancellation of permits to send remittances and the punishment of oil tankers bound for the island.

These measures and the pandemic contributed to an economic crisis in Cuba, where people suffer from shortages of basic products, power outages and rationing.