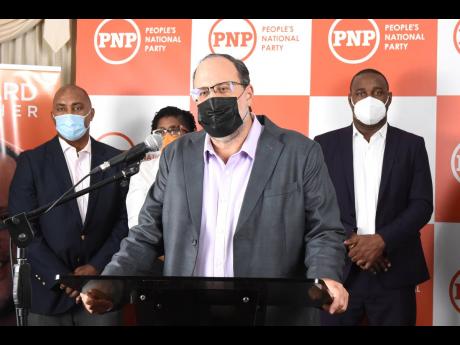 If Mr Golding should listen to himself, he would hear the kind of rank, mealy-mouthed political opportunism that has no place in national discourse in times of crisis.

Mark Golding, the president of the People’s National Party (PNP), can’t have it both ways. He tells Jamaicans that they should take the vaccines against COVID-19, then attempts to undermine any plans by the Government to address the national medical and economic emergency with vaccination mandates by suggesting to the people that they should insist on indemnities before taking the jabs.

If Mr Golding should listen to himself, he would hear the kind of rank, mealy-mouthed political opportunism that has no place in national discourse in times of crisis. Should Mr Golding and his party, on some basis of principle, be really against mandates, they should offer clear and credible alternatives to the Government’s initiatives. Which, given the Government’s, thus far, sub-par performance on vaccinations, ought not to be too difficult for Her Majesty’s Loyal Opposition, assuming that it is one that is thinking.

In the meantime, while it contemplates its own ideas, it would be useful for Mr Golding and the PNP to join this newspaper, and other concerned Jamaicans, in urging Prime Minister Andrew Holness to articulate his administration’s strategy, and tactics, for inoculating around 200,000 Jamaicans, between October and November, to bring the number of jabs administered to one million.

Should the number be achieved, one upside of this, apart from making Jamaica more resilient against the coronavirus, would be preventing the wastage of tens of thousands of doses of vaccines, for which taxpayers have paid good money.

A smidgen over 11 per cent of Jamaicans are fully vaccinated against COVID-19, the virus that last year wiped out more than 10 per cent of the country’s gross domestic product and whose continued disruption of national life means that up to a quarter of the island’s students, without classroom teaching taking place, have dropped out of the education system.

Further, fewer than one in five (19 per cent) of Jamaicans have had at least one dose of the vaccines, when, for most brands, it requires two shots, administered between four and 12 weeks apart, for full vaccination.

At the current pace it could take another three years, or more, for Jamaica to vaccinate 65 per cent of the population, the benchmark the Government set for herd immunity. But that figure is short of the upwards of 80 per cent with which some health experts would be comfortable for halting the virus’ spread. However, achieving even the Government’s more modest number will also have to reckon with significant pockets of vaccine hesitancy and the hardened resistance by anti-vaxxers.

In the face of this conundrum, there have been increasing calls for the Government to institute vaccination mandates in some sectors and for some categories of workers, to shore up fledgling moves in the private sector, led by a handful of firms that have made demands of their employees. In the absence of vaccination, these workers have to periodically produce evidence, based on tests, that they are free of COVID-19.

Prime Minister Andrew Holness has said he isn’t against vaccine mandates, but has been slow in declaring them. His argument is that he first wants Jamaicans to be educated about the vaccines as well as for there to be sufficient drugs so that any Jamaican who wants the jab can receive it without a snag.

“There will come a time when we will have to insist upon people taking the vaccines or be restricted in certain ways,” Mr Holness said during a tour of a rural vaccination site last week.

But even without mandates, the prime minister last week projected that by the end of November, the health authorities will have injected vaccines into the arms of around one million Jamaicans. That would mean delivering nearly 200,000 jabs over six weeks, significantly more than had been managed. It took nearly eight months to administer the first 800,000 doses.

“That (the target) is not impossible and not necessarily a very difficult task,” Mr Holness said. “It just requires greater focus, and so the Government will be redoubling its effort right throughout the country.”

This newspaper hopes that goal is achieved and surpassed. But there is also the backdrop of last month’s stale-dating of nearly 60,000 doses of the AstraZeneca vaccine – a gift from the British government.

Notwithstanding the Government’s argument that the vaccines came only weeks before their past-due date, this newspaper has lamented the administration’s weak mobilisation around the efficacy of the vaccines; its failure to aggressively take the drugs into poor and rural communities where the real resistance of many people is likely to be their inability to afford a taxi or bus fare to the places where vaccines are administered; and its failure to craft a coherent pro-vaccine message in a language that most Jamaicans understand and builds on the island’s history of vaccine use, including mandates.

For example, at birth most babies are vaccinated against a range of childhood diseases, and it’s mandatory that children be inoculated to enter primary school.

Unfortunately, we didn’t hear any of these from Mr Holness. And Mr Golding, with his spurious promotion of indemnification against side effects from the vaccines, let the PM off the hook. It was as though Mr Golding never heard an advertisement for any of the drugs people take for myriad illnesses. Most declare long lists of side effects. People take them because their good vastly outweighs any potential harm, which is generally verified by scientific exploration.

Which is why we believe that Mr Golding himself took the AstraZeneca vaccine without being indemnified against harm; why he previously urged Jamaicans to take the drug; and why he called for the Government to allow only vaccinated foreigners to travel to the island.

Mr Golding would also be aware of the constitutional provisions that allow for a derogation from guaranteed rights in circumstances where this is reasonably justifiable in a free and democratic society.