Ronald Sanders | Wake up and smell the Chow Mein 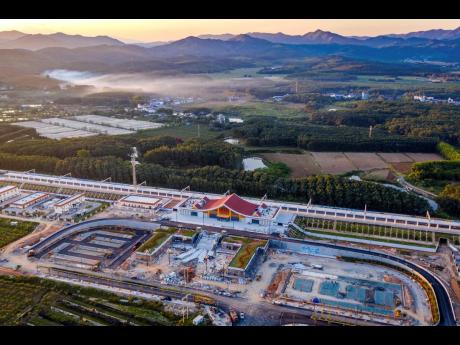 Xinhua via AP
In this photo released by Xinhua News Agency, an aerial view of Ganlanba railway station, one of the stations along the China-Laos railway is under construction in September in southwestern China’s Yunnan Province. China is taking its rail technology overseas, its launched a new passenger express train to Laos as part of its regional Belt and Road Initiative (BRI) to improve connectivity for trade and extend its geopolitical influence. 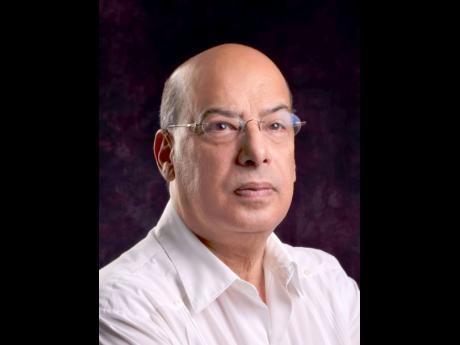 A television interviewer asked me if I thought Caribbean countries, and other developing territories, would benefit from the ‘war for influence’ that the European Union (EU) has launched against the People’s Republic of China.

He was referring to the announcement by the EU Commission president, Ursula von der Leyen, that the EU will launch ‘Global Gateway’, a scheme to compete with China’s ‘Belt and Road Initiative’ (BRI) that has been in place since the end of 2013.

The commission president did not try to hide that the EU’s Global Gateway is aimed at trying to stop China’s spread around the world and its growing influence as the major creditor to more than 60 developing countries on every continent.

“We want to create links and not dependence”, she said – an allusion to the claim by the G7 countries (the rich nations of the West) that China is indebting developing countries so as to control them.

What is striking about this new rivalry to lend money to developing countries is that it has arisen not in response to the needs of these countries for economic advancement and social improvement, but from big power rivalry for influence in their own interest.

Nonetheless, should the contest between richer countries result in the availability of more money to fund growth and prosperity in developing nations, it should be welcomed. Not only would it produce a larger global pot of money, but it will allow developing nations to accept loans from the rival providers that offer the best terms.

LATE IN THE RACE

The EU has started late in this race, and the sums that it is suggesting are less than half of the $1.2 trillion that China has already put on the table for 13,000 projects in 63 countries. The EU Commission said it will “seek” to mobilise $340 billion by 2027 (six years from now) and from a combination of public investment and, as yet unsecured, private investment. What the EU appears to be sure of is $40 billion in export guarantees to European private investors, and around $18 billion in grants.

The EU has pointed out that it has been providing “grants” while China has been providing “loans”. But, in truth, the repayment terms of the Chinese loans are concessionary and affordable. Further, they are used mostly for infrastructure projects that developing countries need, whereas EU grants are highly conditional and take very long to disburse.

Added to all this, while the EU’s Global Gateway was launched with much fanfare, its draft plan does not contain a list of projects it will undertake immediately. Nor does it say to which countries.

Significantly, absent also is any indication if the EU will drop its criterion of low per capita income as a qualifier for access to the Global Gateway. So-called middle-income and high-income countries have long been disqualified for access to grants and concessionary loans from the EU, except in disastrous situations. The development of many Caribbean countries is measured by this flawed criterion.

Perhaps at some point the EU will actually have a serious discussion with regional groups of developing countries about their real needs and how best the EU can help – particularly as several of its members have a sad legacy of underdevelopment across every continent. Among the EU members are France, Italy, Spain, Portugal, Belgium and Germany. The UK is omitted from this list since Global Gateway is an EU project and the UK is no longer an EU member.

The bottom line is that, if this EU-China rivalry, coupled with the G7’s ‘Build Back Better World’ - also an effort to compete with China and halt what is seen as its global influence – produces more money for developing nations, including the Caribbean, it would signal the start of a new world. That would be especially so if developing countries can choose the options best suited to them and not to the lenders. In this way, they could retain their autonomy from all lenders, spreading their exposure and seeking the best terms possible.

However, right now, especially as the global financial institutions such as the IMF and World Bank still reflect the policies of G7 countries, China remains the lender of choice.

The G7 and leading members of the EU who built their economies on the backs of developing countries in Asia, Africa, and Latin America and the Caribbean should wake up and smell the chow mein. It is everywhere.

Ronald Sanders is Antigua and Barbuda’s ambassador to the US and the OAS. He is also a senior fellow at the Institute of Commonwealth Studies at the University of London and at Massey College in the University of Toronto. The views expressed are entirely his own. For responses and previous commentaries, log on to www.sirronaldsanders.com