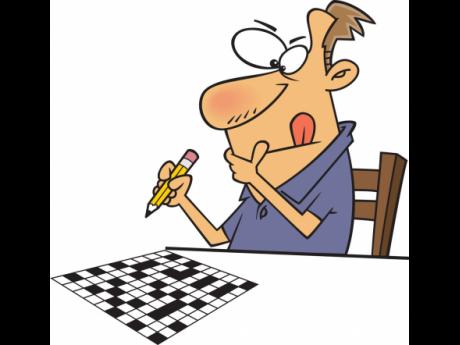 I was at Adam’s Bagels in Trinidad and Adam, the owner, was sitting across the table from me having his coffee and doing the crossword puzzle in the newspaper, something at which he is devilishly adept. I looked at him and immediately remembered...

I was at Adam’s Bagels in Trinidad and Adam, the owner, was sitting across the table from me having his coffee and doing the crossword puzzle in the newspaper, something at which he is devilishly adept. I looked at him and immediately remembered the joke I first heard in sixth form about the pope doing a crossword puzzle and, clearly in trouble, asked the cardinal who was accompanying him, “What is a word for woman that ends in “u-n-t?” The cardinal answered quickly, “Aunt.” The pope immediately responded, “Do you have an eraser?” There is another one where the question was “What’s a word ending with ‘k’ and means ‘intercourse’?” The reply was ‘talk’ and again an eraser was required.

Thinking that it was the devil who made me do it, I switched to a few that are not as naughty but still offbeat, like, “Jesus is doing a crossword when he shouts in frustration ‘I’m stuck on 2 across’.” I like the person who had to do a quick Google search for help with an eight-letter puzzle. The clue was “Dishonestly gaining an advantage”. He then felt bad for looking it up because that was cheating. Then there was the man who asked his wife for help with a crossword puzzle, “What’s another word for an overloaded mailman?” “How many letters?” she asked. His reply was, “Thousands, I imagine.” There is one about a Jamaican whose friend needed help with a crossword puzzle and asked him, “What’s a 10-letter word for ‘colossal’ or ‘huge’?” The Jamaican replied immediately, “Monumental!”, to which his friend replied angrily, “No! I’m not!” Then there was the woman who asked her husband, “What’s a seven-letter word for ‘easily perceived or understood’ that starts with ‘O’?” “Isn’t it obvious?” he asked. She replied, “It should be, but I can’t figure it out. That’s why I’m asking.”

Fortunately for me, I knew all about crosswords long before I even learnt to read. My neighbours, especially the ladies who were faster on the draw than Annie Oakley, Bell Starr and Calamity Jane, taught me the parts of speech. I found out that there were a number of words of three and four letters that came after ‘mother’ and, on Friday nights when all the husbands came home from the rum shops drunk and late, the crosswords flew in all sizes, descriptions and directions. I will never forget the night when my neighbour Calvin was studying for his English exam and was looking up some big words in the dictionary. Then his father came home wobbling and demanding his food. Calvin’s mother grabbed the boy’s dictionary and hurled it angrily at her husband while shouting that he should go back where he came from. It hit Calvin’s father straight in the face and he then picked up the dictionary and flung it back at his wife. For a long time, I thought that was what was meant when I heard about people ‘throwing words’ and I even had this picture in my mind of Mr Cambridge and Mr Oxford throwing words at each other to decide who had the better dictionary.

NOT SURE IF COFFEE CAUSED IT

I am not sure if it is the coffee that caused it, but I started thinking about other crosswords that I have come across. One of the words, “cross-examine”, has come a very long way from the days of Pontius Pilate. While witnesses are many times like the man who, when asked by the lawyer, “What is your IQ?” replied, “Well, I can see pretty well, I think.” Lawyers excel in this area. For instance, a lawyer asked a witness, “Was that the same nose you broke as a child?” The witness pointed out, “I only have one, you know.” In another case, the lawyer asked, “How far apart were the vehicles at the time of the collision?” The three I like are from lawyers to witnesses, “Were you alone or by yourself?”, “So you were gone until you returned?” and “Now sir, I’m sure you are an intelligent and honest man … .” In this case, the witness had the last word, “Thank you. If I weren’t under oath, I’d return the compliment.” There is a fourth that makes me wonder what would have happened if the lawyer had asked a third question. The first thing the lawyer did was tell the witness, “Lastly, all your responses must be oral. Ok? What school you go to?” The witness answered, “Oral.” The lawyer then asked, “How old are you?” The answer was again, “Oral.” At that point the judge warned the lawyer, “Please don’t ask him his sexual preference.”

‘Crosswords’ is not the only pastime I’ve given up. The other major one is Scrabble. For those who are still into the game, the Free Dictionary has identified 208 words that start with the five-letter ‘cross’, and include those of 15 letters like ‘crossopterygian’ and ‘crosslinguistic’ to shorter words that take longer and may have an element of danger like ‘crossroad’, ‘crosswalk’, ‘crosswind’, ‘crossover’, ‘crossbows’, ‘crossfire’ and, my favourite, ‘crosstalk’. I prefer crosstalk like “What do you get when you cross an orange with Quentin Tarantino?” Pulp Fiction. Or “Why did the chicken cross the playground?” To get to the other slide. And the case of the Caribbean chicken in the COVID lockdown- how did it cross the road? In a KFC 20-piece bucket. There is the Englishman who went walking in New York and found that the traffic lights took too long to change. He complained, “The idea of jaywalking makes me cross.” Shifting to the southern hemisphere, “What do you get if you cross Godzilla with a kangaroo?” Big holes all over Australia. And the crossest of the cross, “What does a cross-eyed teacher have trouble controlling in class?” His pupils.

Like the rest of the region, Trinidad has its own crosses. When Trinis exclaim in self-pity, “Look at my crosses”, they mean that they are not limited to merely one crucifixion but are enduring several at the same time and generally from the same person. The one I like is ‘cross-thread’, which is about being short-tempered with people who irritate us. “Look man,” we say, “If you continue to get on with that stupidness, you and me go cross-thread this morning!”

Just then, I heard the light tread of the waitress coming towards my table. She asked me if I wanted another coffee and I said, “Just a bit of coffee” which in crossword language is “bean”. I wanted to say “Bean dear. Done that.” Instead, I went to “a brewed drink prepared with roasted beans (coffee)”, especially “a type of coffee made with espresso and hot milk (latte)” instead of “one with little or no caffeine in it (decaf)”. I thought of ordering a full-flavoured, concentrated form of coffee that is served in “shots” (espresso) or even a shorter, sweeter shot (ristretto), and wondered whether I should demand a light roast coffee (blonde) that comes from one location (single origin) but then I settled for coffee made with milk that has been frothed up with pressurised steam. “I will take a cappuccino,” I said, my mind fully made up (resolved).

Tony Deyal was last seen feeling sorry for the patient who complained to his doctor, “My crossword is making me very depressed.” The doctor replied, “Well try not to get two down.” Send feedback to columns@gleanerjm.com