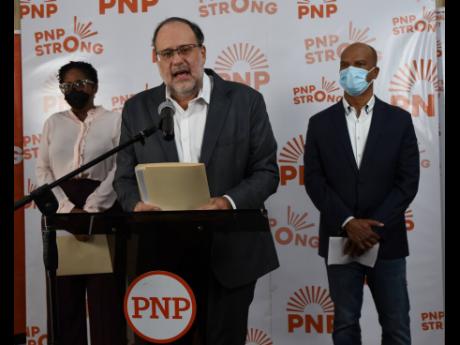 File
Mark Golding (centre), Opposition leader and president of the People's National Party, addresses the media during a press conference on the economy, national security, health and education.

MARK GOLDING’S sniffy response to Prime Minister Andrew Holness’ reorganising of the Government was entirely predictable. But the PM’s mostly uninspiring assignments made it easier for the Opposition leader to sneer.

Mr Golding called the prime minister’s action “a trivial exercise” that will cost taxpayers more without improving the management of the country.

Many people will agree with Mr Golding. The popular view, it appears, is that several poor-performing, or under-the-cloud ministers were able to keep their jobs, and that the 30-member executive, including 23 full ministers, is top-heavy.

Indeed, Mr Golding ridiculed the Office of the Prime Minister (OPM) and the Ministry of Economic Growth and Job Creation, of which Mr Holness is the substantive minister, as emblematic of the administration’s missteps. Six ministers without portfolio are assigned to those bodies, each, presumably, given charge of specific functions.

“It (OPM) used to be the place to house the geriatric politicians who refused to go home,” he said. “It is now the naughty corner to park ministers who have disgraced the Government.”

But having exercised his opportunity to snipe, Mr Golding cannot escape scrutiny over the performance of his shadow Cabinet and of his own responsibility as leader of the Opposition to marshal its work. He can claim neither performance to be spectacular. Indeed, in this newspaper’s view it is below par.

We appreciate that Mr Golding presides over a fractured and querulous People’s National Party (PNP), whose long-standing divisions broke out afresh after it lost the government in 2016.

There are two points to be made on this front. First, Mr Golding was aware of those divisions when he offered himself for leadership after the PNP was severely trounced in the general election 16 months ago. He felt he was the person to lead the healing. In this respect, we cut him very little slack.

The second, and more fundamental, observation is about the values we ascribe to, and what we expect from, a political party that asserts itself as the alternative for government and is in active contention for state power in a multiparty, liberal democracy. Such a party has to be prepared to govern effectively.

Overcoming personal ambition and jockeying for office when a party is in opposition fixes relatively easily if it wins power. The constitutional authority of the prime minister, except in the extreme of circumstances, soon contains those manoeuvrings. Indeed, Prime Minister Holness might recall the conspiracies to oust him not long before the 2016 poll, but collapsed when it became clear that the election was imminent. People coalesced for the election.

What political parties do not easily overcome is assuming office without clear plans or policies, which often happens when their expectation is to achieve government by default. That is, they hope the incumbents perform so badly or otherwise lose the confidence of the electorate, that they are chucked out of office.

It is a long time yet to Jamaica’s next general election, unless Mr Holness calls one very early. But thus far, Mr Golding’s PNP seems intent to come to office on the back of the perceived failings, moral or otherwise, of the Holness administration, rather than on the basis of its policy offerings.

It is right that the Opposition should highlight issues of corruption, the problem of crime and, if it believes that to be the case, ineptitude in the management of the COVID-19 pandemic. Or, if it feels the economy is being badly run. But these should be substantive critiques outlining the policy shortcomings and offering alternatives to the Government’s programmes and initiatives.

This newspaper, unfortunately, has heard little of this from Mr Golding’s shadow Cabinet. Those of its members who say anything, or suppose they have something to say, are usually trite and vacuous. With a few exceptions, their declarations are more about mostly political point-scoring, rather than serious discourse on policy.

It appears, therefore, that the PNP is yet to engage in a policy-formula exercise. Or, if it has, it is holding its ideas close to its chest. Which would be wrong if the party’s leaders view Jamaica as a mature democracy, whose electorate is deserving of the best information to inform their views about political parties and why they should vote for them.

In that context, it may be time for Mr Golding to undertake an assessment of his shadow Cabinet and determine whether he has the right mix of persons in the right portfolios, and whether he wants to structure a team that mirrors Mr Holness’ formulation. Conversely, Mr Golding could fashion a group that is closely in line with what he intends for government, thus giving its members an opportunity to be fully attended to the issues in their expected government portfolios.